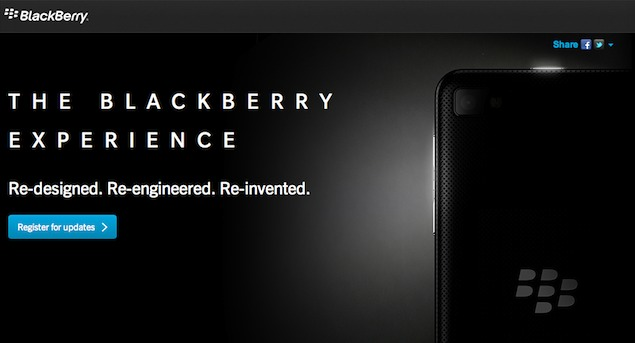 This page is a one stop shop to keep interested customers and media persons updated with new developments happening on the BlackBerry 10 front. The page shows a glimpse of what BlackBerry 10 OS will look like. There is also a 14 minute demo video of the new OS that was showcased during the BlackBerry Jam sessions. The video shows how the new features like BlackBerry Flow and BlackBerry Hub will function. There is also an option to register for updates available on this page.

RIM has already announced that it will be showcasing its flagship smartphones along with the new operating system in several countries on January 30, 2013. There have also been news reports suggesting that a QWERTY smartphone running on the BlackBerry 10 OS will start retailing from June 2013.

RIM's CEO has asserted that new line of BlackBerry 10 devices will provide Research In Motion with a framework of growth over the next decade.