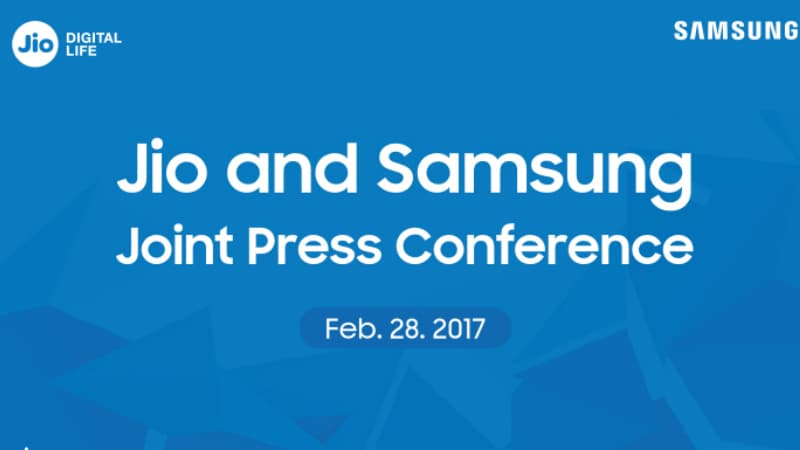 Apart from its exclusive press conference at MWC 2017 on February 26, Samsung is joint hosting another event at the Barcelona trade show - a joint event with newbie telecom operator Reliance Jio. The event looks to "foster engagement and participation among industry leaders, governments, and communities, by discussing Jio's successful 4G LTE business and how it has transformed the everyday lives of 1.3 billion Indians."

The Samsung and Reliance Jio joint event will be held on February 28 at 1.15pm IST (8:45am CET). It appears to be a platform for Reliance Jio to market itself for potential international business, and maybe also announce international expansion plans. Reliance Jio commenced its services in India in September, and has managed to rake in millions of subscribers since then. According to Telecom Regulatory Authority of India's recent data, Indian subscriber base grew by 21.02 million to cross 1.12 billion in November 2016. Most of the credit for this goes to Reliance Jio.

The telecom operator brought the '4G revolution' in the country, by offering free data and voice calls for six months. The free plan will end on March 31, after which plans for data will be introduced, but voice calling looks to remain free forever. The plans have attracted a huge subscriber base, so much so, that it created a world record of adding 16 million users in its first month of operations. In January, the operator reported it had managed to garner 72.4 million subscribers in just 4 months.

Samsung was one of Jio's initial partners in India, and this partnership looks to make impacts in international markets as well. The invite says the press conference will also see Reliance Jio share the contributions of made by Samsung as a solutions partner for the operator, and adds, "We hope for this to benefit participants in understanding how we have and will make impacts at local and international levels for the growth of the industry." The event will be hosted by President of Reliance Jio, Jyotindra Thacker and President Head of Networks Business at Samsung Electronics, Youngky Kim.

This will be Reliance Jio's first appearance at MWC, and is monumental for the company's growth in such a short time. As for Samsung, it is alternatively expected to launch the Galaxy Tab S3 at its event on February 26, and also show a one-minute video teaser of the Galaxy S8 smartphone.