As multiple users reported on the Mi Community forums, the MIUI 10 Global Stable update for the Redmi Y1 and Redmi Y1 Lite is around 507MB of size. The update, particularly for the Redmi Y1, brings MIUI v10.2.1.0.NDKMIXM, as per the screenshots shared by the users.

The changelog featured on one of the screenshots highlights that the MIUI 10 Global Stable update for the Redmi Y1 and Redmi Y1 Lite brings an updated Android security patch. The update also apparently fixes the interface for switching between the front and rear cameras during video calls and addresses issues around notifications. Furthermore, it is found to fix issues related to the lock screen, status bar, and notification bar, and the default recorder app. 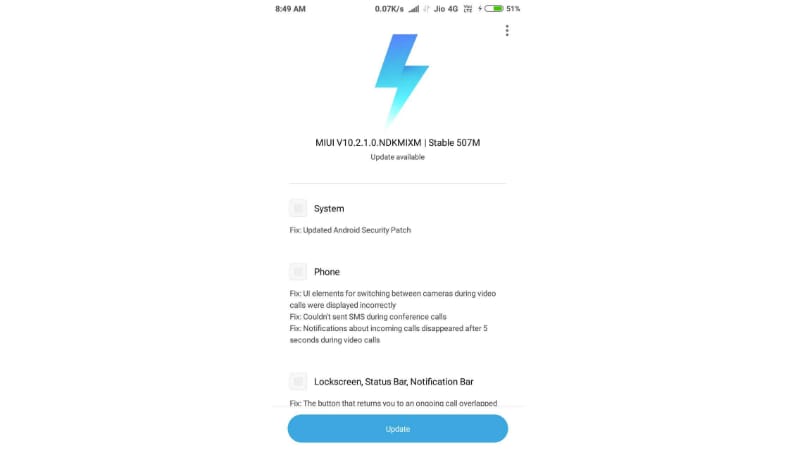 That being said, the latest MIUI update doesn't include the anticipated Android Oreo, and the software is still based on Android 7.1 Nougat.

How to download MIUI 10 on Redmi Y1, Redmi Y1 Lite

You can manually check the availability of the MIUI 10 Global Stable update on the Redmi Y1 or the Redmi Y1 Lite by going to Settings > About phone > System update.

TCL May Be Working on a Foldable Smartphone That Bends Into a Smartwatch, and 4 Other Foldable Devices
New Zealand to Target Online Giants With Digital Tax