Redmi S2, the upcoming smartphone by Xiaomi that is debuting in China on May 10, is now claimed to be the best selfie phone in the Redmi series. The latest claim has been made through an official Redmi S2 teaser that also flaunts the front of the upcoming smartphone. Other teasers deal with other aspects of the front camera. Additionally, the listing of a global version of the handset has been spotted on Aliexpress that hints its availability outside China, including India and other worldwide markets. Xiaomi is apparently projecting the Redmi S2 as its selfie smartphone to counter similar offerings by domestic competitors such as Huawei, Oppo, and Vivo.

The fresh Redmi S2 teaser claims it as the best Redmi phone for shooting selfies. The image of the smartphone featured on the teaser suggests a large front-facing camera sensor that could be accompanied by a soft LED flash. Also, there are thin bezels and rounded edges on the display panel - hinting it to have 18:9 aspect ratio. The official image in the teaser additionally looks similar to what has so far been leaked. Another teaser reveals the Redmi S2 will bear a 16-megapixel front camera with automatic HDR, to take better shots in daylight. A third teaser claims the smartphone will have both an AI portrait mode as well as AI-based beautification features. 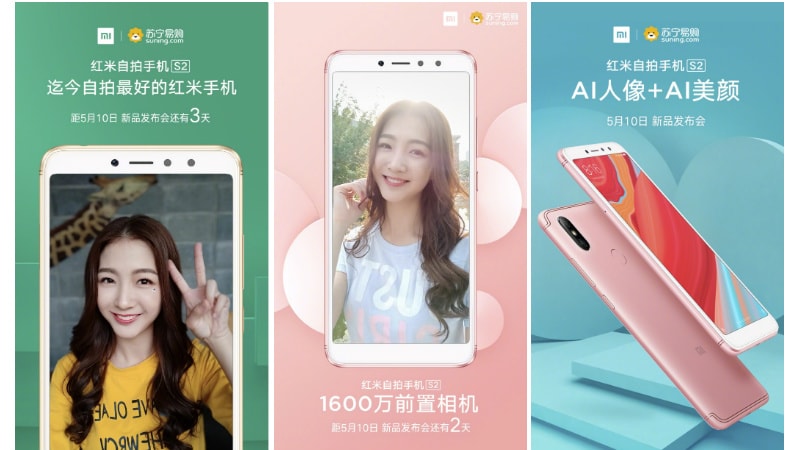 Coming to the listing on Aliexpress, the Redmi S2 will come with a dedicated dual SIM slot that has a separate room for a microSD card. This is unlike the hybrid dual SIM slot that we have seen on many previous Redmi series models. In terms of specifications, the handset has been listed with a 5.99-inch HD+ (720x1440 pixels) display, octa-core Qualcomm Snapdragon 625 SoC, 16-megapixel front camera sensor, dual rear camera setup, and a 3080mAh battery. It also includes a fingerprint sensor on the back. Moreover, some previous reports claimed that the Redmi S2 will come in three different variants with 2GB/ 3GB/ 4GB RAM options and 16GB/ 32GB/ 64GB inbuilt storage options.