Redmi S2 is all set to be Xiaomi's upcoming budget smartphone as the Chinese phone maker has confirmed the phone's launch date. A teaser posted on Weibo by Xiaomi confirms the launch of the Redmi S2 smartphone on May 10, which will be the first model in the company's new Redmi S series. The teaser also shows the Redmi S2 rear panel, which looks quite similar to that of Xiaomi Redmi Note 5 Pro and the Mi 6X. Also, it seems the handset will be exclusively available via Suning.com in China; the handset is also rumoured to be headed to India, though it is not yet clear when it will hit our shores.

This update was revealed by Xiaomi in a post on Weibo. Previously, Xiaomi had posted another teaser that showed off the letter 'S' in red and blue paint. Further, the Redmi S2 was also spotted with high-resolution product shots at the opening of a Mi Store in Czech Republic. 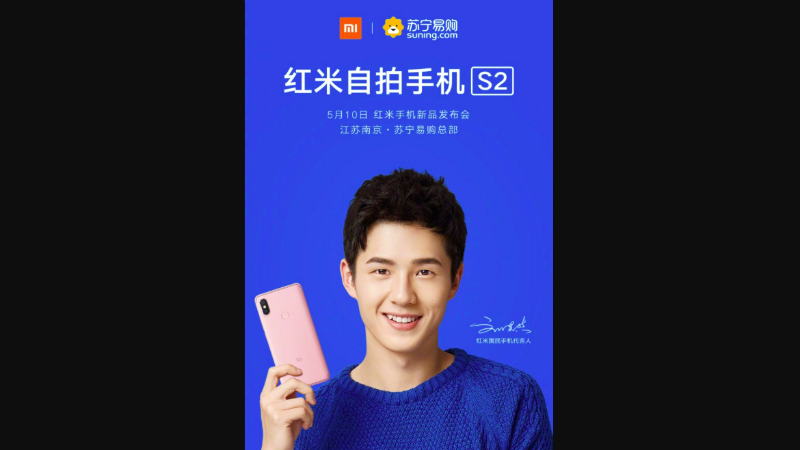 Additionally, the Redmi S2 has been spotted on certification website TENAA once again. The new listings show two variants of the handset, with model numbers M1803E6T and M1803E6C and identical hardware. As per the listing, the smartphone will run Android 8.1 Oreo-based software and feature a 5.99-inch HD+ (720x1440 pixel) display and octa-core processor. It also shows the handset will come in 2GB, 3GB and 4GB RAM variants, and have 16GB, 32GB and 64GB storage options, all with support for up to 256GB microSD cards.

There will be a dual rear camera setup in vertical alignment featuring a 12-megapixel primary sensor and 5-megapixel secondary sensor, as well as a 16-megapixel selfie camera. Sensor onboard include gravity sensor, distance sensor, light sensor, and fingerprint recognition. It is said to come in black, rose gold, gold, white, blue, red, pink, grey, and silver colour options. Powering the handset - which will have dimensions of 160.73×77.26×8.1mm and weigh 170 grams - will be a 3000mAh battery.

Prior to this too the Redmi S2 has been spotted on TENAA, as well as certification website  3C that hinted at an impending launch in the country. While China will witness the unveiling next week, an India launch is also in the pipeline if rumours are to be believed.