Redmi Note 9 Pro has started receiving its first MIUI 11 update that brings the February 2020 Android security patch. The new update, which carries MIUI version 11.0.4.0.QJWINXM, also includes system-level performance improvements.The latest software build drops just days after Xiaomi officially launched the Redmi Note 9 Pro as its latest affordable smartphone in the country. The phone is also yet to go on sale. Comes as the successor to the Redmi Note 8 Pro, the new Redmi phone has a hole-punch display and a quad rear camera setup to attract customers. The smartphone also runs Android 10 with the company's proprietary MIUI 11 on top.

The MIUI 11.0.4.0.QJWINXM update for the Redmi Note 9 Pro is sized at 409MB and is available for download through an over-the-air (OTA) package. The update doesn't have any major changes over what the company offered initially. However, it does bring the February 2020 Android security patch.

Alongside the new security patch, the latest MIUI update for the Redmi Note 9 Pro brings optimised system performance and improved security and stability, as per the changelog. 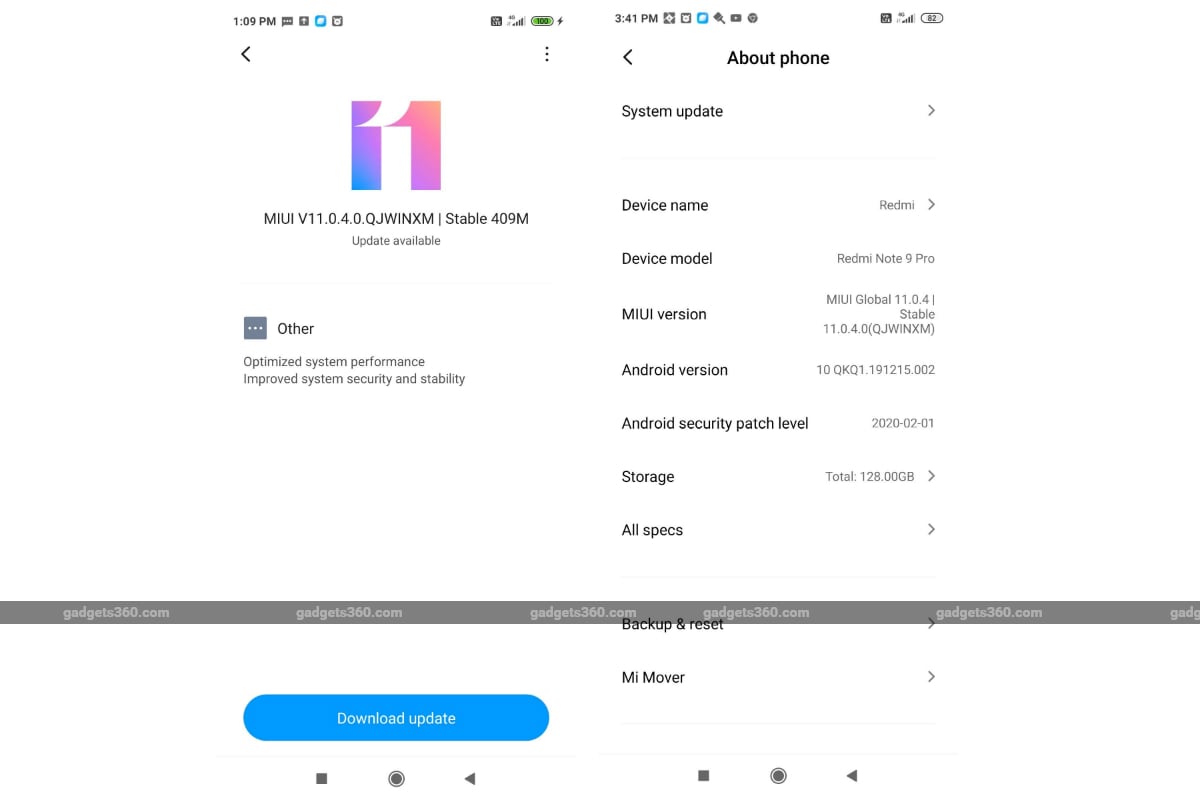 Gadgets 360 was able to receive the new update. However, since it's been rolled out in phases, you might have to wait for some time to receive its presence on your device, of course, following its first sale that is scheduled for tomorrow.

That being said, you could be able to manually check the arrival of the latest software version upon receiving the Redmi Note 9 Pro by going through Settings > About phone > System update > Check for updates.

The dual-SIM (Nano) Redmi Note 9 Pro runs Android 10 with MIUI 11 on top and features a 6.67-inch full-HD+ (1080x2400 pixels) IPS display with the hole-punch design and 20:9 aspect ratio. The smartphone is powered by an octa-core Qualcomm Snapdragon 720G SoC, paired with up to 6GB of RAM and up to 128GB of onboard storage. It comes with a quad rear camera setup that has a 48-megapixel Samsung ISOCELL GM2 primary sensor with a six-piece f/1.79 lens. The phone also has a 16-megapixel selfie camera.