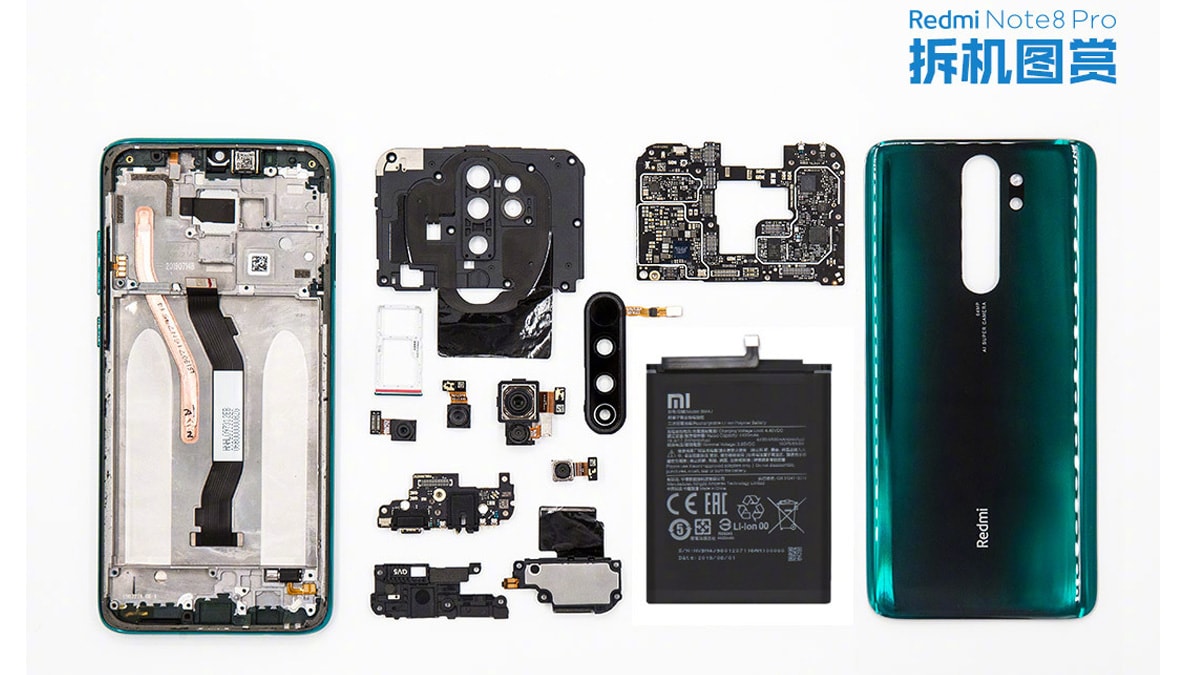 Redmi Note 8 Pro was in China last week by Xiaomi, along with a bunch other products. This, along with the Redmi Note 8, are the first quad-camera Redmi phones to hit the market and their obvious target is the new Realme 5 series. We already know most of the details about the phone and its pricing but some new teardown photos of the Redmi Note 8 Pro tip more information about the components it uses. The photos, which shows the Redmi Note 8 Pro in various stages of disassembly also revels other things such as a copper heat-pipe for the liquid cooling the SoC, a hybrid dual-SIM slot, and the fact that the phone will support Qualcomm's Quick Charge fast charging tech, despite running a MediaTek SoC.

The Weibo post shows the internal components of the Redmi Note 8 Pro, along with a description of the parts in Chinese. With most of the components stripped apart, including the battery, we can clearly see a copper heat-pipe snaking through the chassis. This will be used to keep the MediaTek Helio G90T, a newly launched chipset, cool when gaming. The Redmi Note 8 Pro is the first phone that to feature this new chip, which is specifically designed with gaming in mind. Naturally, playing heavy games could cause some heating, so it's nice to see Xiaomi taking some precaution here. The company had announced a liquid cooling system for the smartphone, and here we see how it has been implemented.

Another close-up shot of the SIM tray reveals a hybrid dual-SIM tray, with support for either two Nano-SIM cards or one Nano-SIM and a microSD card. Keep in mind that this is the Chinese version of the phone so but the time it comes to India, which should be in roughly eight weeks, we could get a dedicated space for a microSD card. A close-up shot of the SoC cluster is another interesting one, which mentions a presence of a Qualcomm SMB1351 chip. This indicates that the phone will support Qualcomm Quick Charge 3.0, in addition to MediaTek's Pump Express fast charging. The supplied charger might only support MediaTek's fast charging method, but it's nice to see Xiaomi include the hardware for other popular fast charging standards too. The photos also show off the 64-megapixel primary sensor and the three other sensors. This phone will be a direct competitor to the Realme XT, which also has four cameras and the same 64-megapixel primary sensor.

The Redmi Note 8 Pro supports dual-SIM, runs on Android Pie-based MIUI 10, packs a 6.53-inch full-HD+ (1080x2340 pixels) screen, and is powered by MediaTek's new gaming-focussed Helio G90T SoC, paired with up to 8GB of RAM. Xiaomi has also added liquid cooling support in the smartphone to improve the gaming experience for the Redmi Note 8 Pro users. Other gaming-centric features in the phone include the Game Turbo 2.0 mode. The company will also be selling a game controller for the phone.

The Pro variant is the company's first phone with a 64-megapixel main camera. This is accompanied by an 8-megapixel wide-angle shooter and two 2-megapixel cameras — one for macro and the other for depth calculations. On the front, there is a 20-megapixel selfie camera on board. It packs a 4,500mAh battery with support for 18W fast charging, NFC, USB Type-C port, 3.5mm audio jack, IR blaster. The Redmi Note 8 Pro is also IP52 certified for water resistance.