Xiaomi Redmi Note 7 is now in the news, thanks to a Geekbench listing. A poster suggesting its imminent launch has also made its way online. The Geekbench listing indicates that the smartphone will be powered by the Snapdragon 660 SoC and the poster leak claims that the Redmi Note 7 will launch as soon as January 10, i.e., Thursday. Separately, Xiaomi has announced a partnership with lip syncing app Tik Tok for its launch event, and has also shared a video showing off the durability and toughness of the upcoming Redmi smartphone. While previous leaks suggested that the Xiaomi January 10 launch event will see a Redmi 7 or a Redmi Pro 2, these new leaks suggest that the Redmi Note 7 may be unveiled.

The Geekbench listing hints that the Redmi Note 7 runs on Android 9 Pie, is powered by the Snapdragon 660 octa-core processor, and packs a 6GB RAM. The same Redmi Note 7 has also been spotted in a leaked poster by Slash Leaks. The poster shows the device from the front and back, and it resembles the TENAA listing spotted last week. The Xiaomi Redmi Note 7 is seen sporting a waterdrop notch up front, a dual rear camera setup stacked vertically, and a gradient back finish. Furthermore, the poster suggests that the smartphone will arrive in three colour options - Black, Blue, and Pink.

The poster also claims that the Redmi Note 7 will launch on January 10 and will sport a 48-megapixel sensor. Xiaomi has been teasing a 48-megapixel sensor-backed phone for its January 10 event since a while now, with the latest announcement confirming that Redmi will now be considered an independent brand that will focus on aggressive pricing and being online exclusive.

Running up to the launch, Xiaomi has rolled out another teaser poster on Weibo announcing its strategic partnership with Tik Tok for the upcoming smartphone. The company could be looking at exploring the online content market with this new partnership, but this is all just speculation at this point. Xiaomi will detail what this partnership brings to the table at the event. 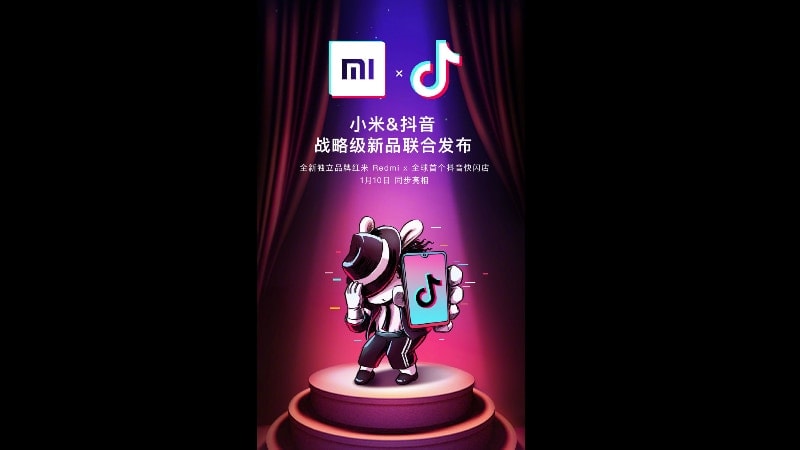 Xiaomi is teasing its partnership with Tik Tok ahead of the January 10 launch
Photo Credit: Weibo/ Xiaomi

Furthermore, it has also posted a short video showing off the durability of the upcoming Redmi phone. In the video, the Xiaomi staff is seen stomping on the smartphone multiple times, but it escapes the torture scratch-free and crack-free. Watch the video here.