Redmi Note 5 Pro has received the anticipated Face Unlock feature via an OTA (over-the-air) software update. At its launch in India last week, Xiaomi promised that it will roll out the feature for the Redmi Note 5 Pro through an update by the end of March, but it has now released the update in an apparent bid to please initial buyers. It worth noting that the Redmi Note 5 Pro is Xiaomi's first smartphone in the country to get the Face Unlock feature. The smartphone is among the few models under Rs. 18,000 with 6GB RAM, and - now - face recognition.

The Face Unlock feature on the Redmi Note 5 Pro is touted to be faster than the fingerprint scanner. However, it is certainly not as secure as the fingerprint scanner. Xiaomi India's Lead Product Manager Jai Mani at the launch event elaborated the artificial intelligence (AI) tweaks empowering the Face Unlock. "Our face detection algorithm scans facial features in roughly 500 milliseconds using a high accuracy matching mechanism," said Mani.

Xiaomi is bringing the Face Unlock feature through the MIUI v9.2.4 NEIMIEK update that comes in 1.6GB. The new software update also includes camera improvements and stability optimisations. Although, as per Xiaomi Product PR Lead Clinton Jeff, the update will be available out of the box for customers who ordered the Redmi Note 5 Pro through its first flash sale earlier this week, you can manually check its availability by going to the Settings > System updates option or by using the Updater app. 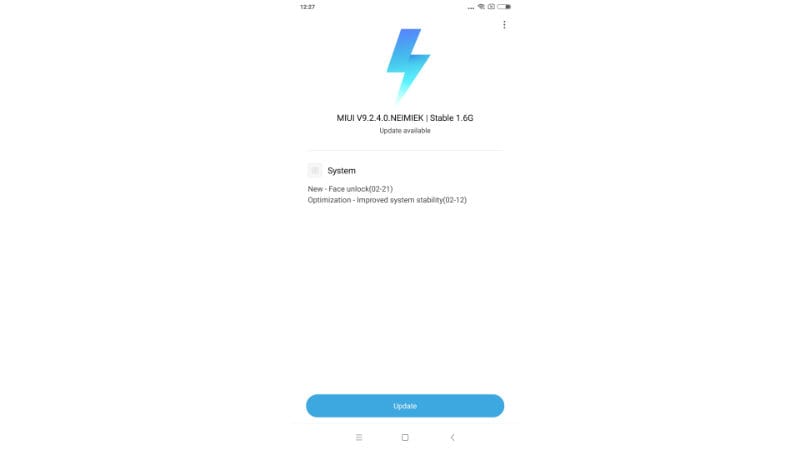 The Redmi Note 5 Pro comes in two variants in India, with 4GB and 6GB RAM options. While the Redmi Note 5 Pro 4GB RAM variant is priced at Rs. 13,999, its 6GB version is available with a price tag of Rs. 16,999. Both come in Black, Gold, Lake Blue, and Rose Gold colour options.

Running Android Nougat-based MIUI 9, the dual-SIM Redmi Note 5 Pro (Review) features a 5.99-inch full-HD (1080x2160 pixels) display with 18:9 aspect ratio. The smartphone is powered by an octa-core Snapdragon 636 SoC, paired with Adreno 509 GPU and either 4GB or 6GB of RAM. It has a dual camera setup on the back, with 12-megapixel and 5-megapixel camera sensors. On the front, the handset has a 20-megapixel Sony IMX376 sensor that is accompanied by an LED selfie-light module. Further, there is 64GB onboard storage that is expandable via microSD card and a 4000mAh battery.