As per the screenshots provided by the users on the Mi Community forums, the MIUI 10.2 update for the Redmi Note 3 comes in 178MB of download size. The update is based on MIUI V10.2.1.0MHOMIXM build and carries the July 2018 Android security patch.

The official changelog available on the update screen shows that the latest MIUI version for the Redmi Note 3 comes with a list of bug fixes. It address issues related to the floating notifications, fingerprint sensor, earphone icon, and scrolling screenshots. Also, the update fixes UI elements related to the front and rear camera sensors during video calls. Xiaomi has also apparently fixed the recorder to show you updated recording status in the notification panel when a recording is paused. 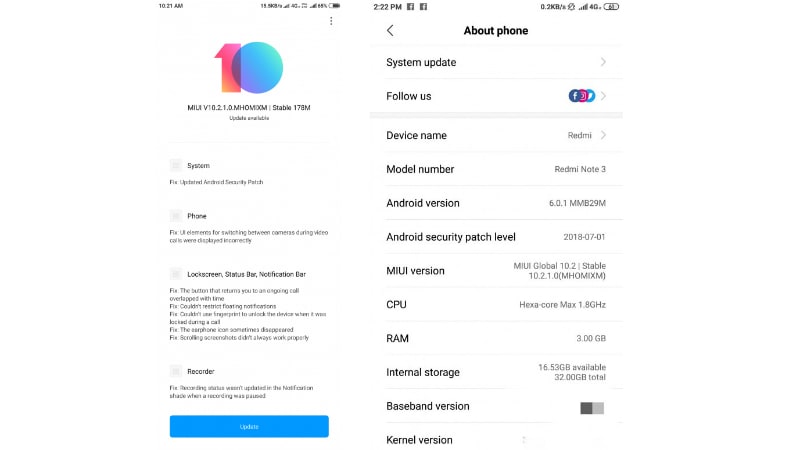 You can check the availability of the MIUI 10.2 update on your Redmi Note 3 by going to Settings > About phone > System update. The update's availability was first reported by Fonearena.

It is worth noting here that Xiaomi last month announced that MIUI 10.2 would the last final software update for the Redmi Note 3 and Mi 5.

"We have confirmed with MIUI MIUI Global ROM developer team that there will be no Global Beta update for Mi 5 & Redmi Note 3 Pro, except for the last stable ROM that comes in the near future. And Beta Team for Mi 5 and Redmi Note 3 Pro will be disbanded after its release," a moderator had written on Xiaomi's MIUI Official Forum last month.

To recall, the Redmi Note 3 was launched in India back in March 2016. The smartphone had debuted with MIUI 7 based on Android Lollipop and emerged as one of the most selling models by Xiaomi.

Further reading: Xiaomi Redmi Note 3, Redmi Note 3, MIUI 10.2, MIUI 10, Xiaomi
Jagmeet Singh Email Jagmeet
Jagmeet Singh writes about consumer technology for Gadgets 360, out of New Delhi. Jagmeet is a senior reporter for Gadgets 360, and has frequently written about apps, computer security, Internet services, and telecom developments. Jagmeet is available on Twitter at @JagmeetS13 or Email at jagmeets@ndtv.com. Please send in your leads and tips. More
Google Generated Most Positive Buzz in India in 2018, Says Research Firm
Baidu Slammed for Promoting Its Own Content in Search Results, Company Pledges to Improve