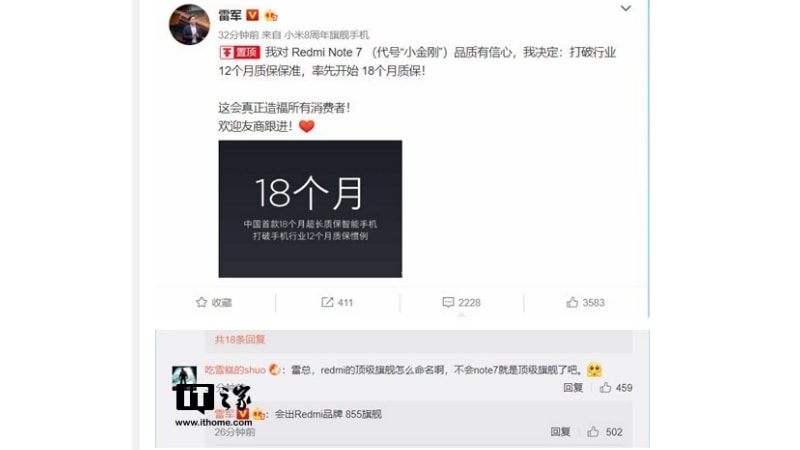 Xiaomi Redmi Note 7 Pro is expected to be priced at CNY 2,500

Xiaomi launched the Redmi Note 7 in China on Thursday - the first smartphone in the new 'Redmi by Xiaomi' sub-brand that was announced last week. The Redmi Note 7 has been priced aggressively starting at CNY 999 (roughly Rs. 10,400), and the company is now reported to launch another Redmi device with the flagship Snapdragon 855 SoC. Furthermore, Xiaomi has also confirmed that the Redmi Note 7 Pro is also slated to launch after the Spring Festival this year, and it is expected to come with a 48-megapixel Sony IMX586 sensor.

CEO Lei Jun replied to a comment on his Weibo channel (spotted by ITHome) stating that a Redmi device powered by the Snapdragon 855 processor is in the offing, and that will instead be the flagship. A report by GizChina speculates the flagship device with the Snapdragon 855 will be priced around CNY 2,500 (roughly Rs. 26,000). According to GizChina, Xiaomi at the Redmi Note 7 launch event that the Redmi Note 7 Pro is in the works with a 48-megapixel Sony Sony IMX586 sensor.

Furthermore, according to GizmoChina, Xiaomi also announced at the event that the Redmi Note 7 Pro is slated to be announced after Spring Festival this year.

To recall, the company recently announced the Xiaomi by Redmi sub-brand, and it is set to focus on aggressive pricing and be online exclusive. Explaining the decision to separate Redmi as a sub-brand, Jun explained that this would allow them to make more smartphones in the affordable category, while the Mi brand will focus heavily on premium to high-end smartphones moving forward.

The Redmi Note 7, launched Thursday, is slated to go on sale in China from January 15. It is seen to sport a large 6.3-inch display, a Snapdragon 660 processor, a 48-megapixel sensor, and a 4,000mAh battery.