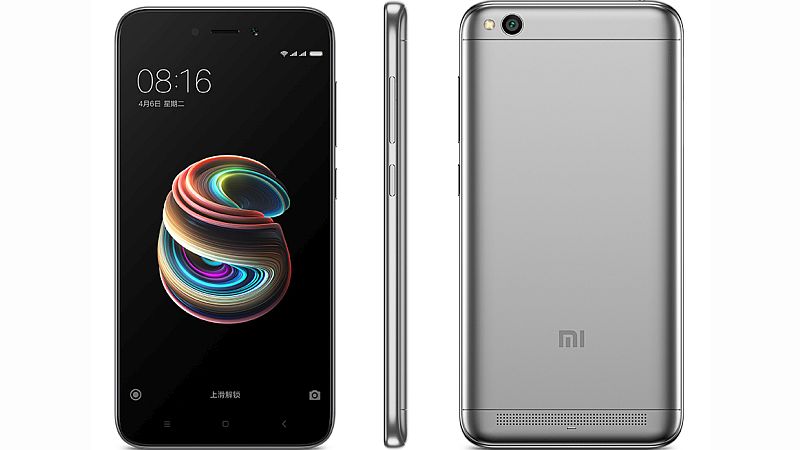 Redmi 5A smartphone has been launched by Xiaomi in its home market as the successor to the Redmi 4A. The new Redmi 5A has a metal-like matte texture that, according to Xiaomi, is "much lighter than the metal." For those curious, the handset weighs 137 grams. Another highlight of the Redmi 5A is its battery, which the company says will deliver eight days of juice. Like its predecessor, the MIUI 9-based smartphones does not have a fingerprint sensor, but sports some design changes, such as rounded corners for a comfortable grip. However, the handset only has minor upgrades over last year's model.

As mentioned above, the new Redmi 5A doesn't bring massive upgrades when compared to the Redmi 4A in terms of specifications. It features a 5-inch HD (720x1280 pixels) display with a pixel density of 296ppi. Much like its predecessor, the new model is also powered by the quad-core Qualcomm Snapdragon 425 SoC, clocked at 1.4GHz, and coupled with 2GB of RAM. There's only one storage model announced at launch as of now but we can expect more variants in future.

Redmi 5A comes with 16GB inbuilt storage which is further expandable via microSD card (up to 128GB). The dual-SIM smartphone packs a 3000mAh battery which seems to be a downgrade when compared to the 2016 model's.

The Redmi 5A will run MIUI 9 out-of-the-box which means that the handset will come with all bells and whistles of the new MIUI version. The new MIUI 9 features include Smart assistant, Smart app launcher, Image search, Quick reply and notification management, new Home screen enhancements, Lock screen enhancements, and split screen multitasking among others.