Realme X50 Pro users will need to take a backup of their data before installing the beta as it will wipe all current data on the phone. 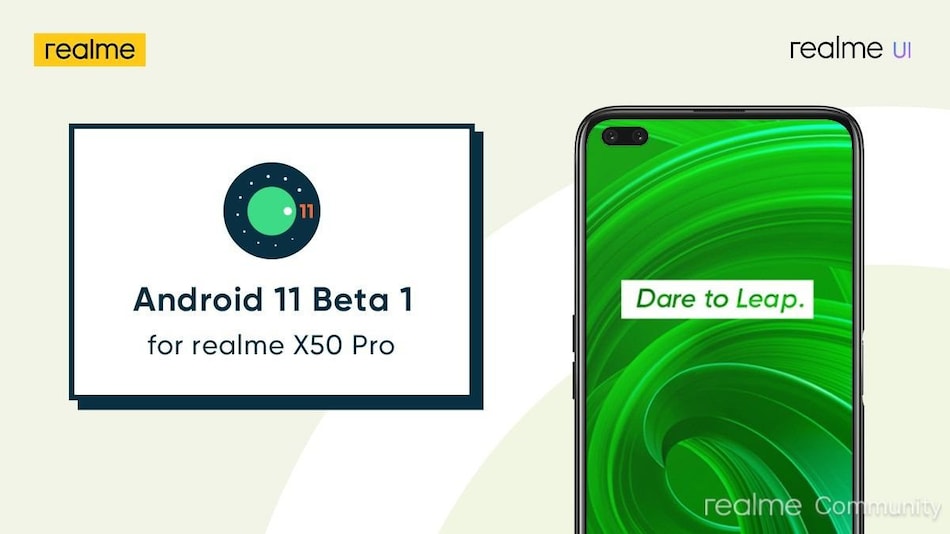 Realme X50 Pro has started receiving Android 11 beta 1 as part of the company's India Android 11 Developer Preview Programme, which is meant for those interested in trying out the new OS. The development was shared on the Realme community page along with instructions on how users can install the new version of Android. Realme had announced back when Google released Android 11 beta 1 that the Realme X50 Pro will be among the first smartphones to get the latest iteration of the OS in early July and now the company has made good on its promise.

We are thrilled to announce that the @Android 11 Developer Preview Program for #realmeX50Pro is now ready! Head to the #realmeCommunity to get #Android11 Beta 1 on your device today: https://t.co/aRKLqPrtmQ pic.twitter.com/sCEdLqY6Pn

The Realme community post states that Realme X50 Pro users need to have the model number RMX2076PU with the latest build of Android 10 - RMX2076PU_11.A.25 – for this update to work. The company also states that this update is for developers only and interested users should not flash it on their daily use phones since it has different stability and performance issues on all devices.

How to install Android 11 beta 1 on Realme X50 Pro

To install Android 11 beta 1 on your Relame X50 Pro, the company recommends that you should first back up your data as this update will wipe all of it. Once all data has been backed up:

1. Head to the community page and download the right file depending on your current build version, i.e. , RMX2076PU_11.A.25 or RMX2076PU_11_C.03. Note that if you are on an older version of Android, you will first have to flash the RMX2076PU_11.A.25 firmware and then Android 11 beta 1 firmware RMX2076PU_11_C.03.
2. If you have downloaded the file on your desktop, move it to your Realme X50 Pro. If it is already on your phone, use the file manager to locate the file and tap on it.
3. You will be prompted to back up your data, which if you have already done, tap Next.
4. You will see another prompt for backing up your data, tap Next.
5. Next will be a confirmation for the update on which you will have to tap on Upgrade Now

Wait for the process to complete and you should boot into Android 11 beta 1 on your Realme X50 Pro.

Back when Google announced the Android 11 beta 1, most manufacturers also made announcements (OnePlus, Xiaomi, Poco, and Oppo) of their top-tier phones getting the beta. Realme was also one of the manufacturers and Madhav Sheth, CEO of Realme India, himself tweeted that Realme X50 Pro users in India will get the chance to try out Android 11 beta 1 on their phones. Now, it is finally happening.

Zoom Got Big Fast. Then Videobombers Made It Rework Security
Tesla Workers Say Were Threatened With Firing if They Don't Return to Jobs