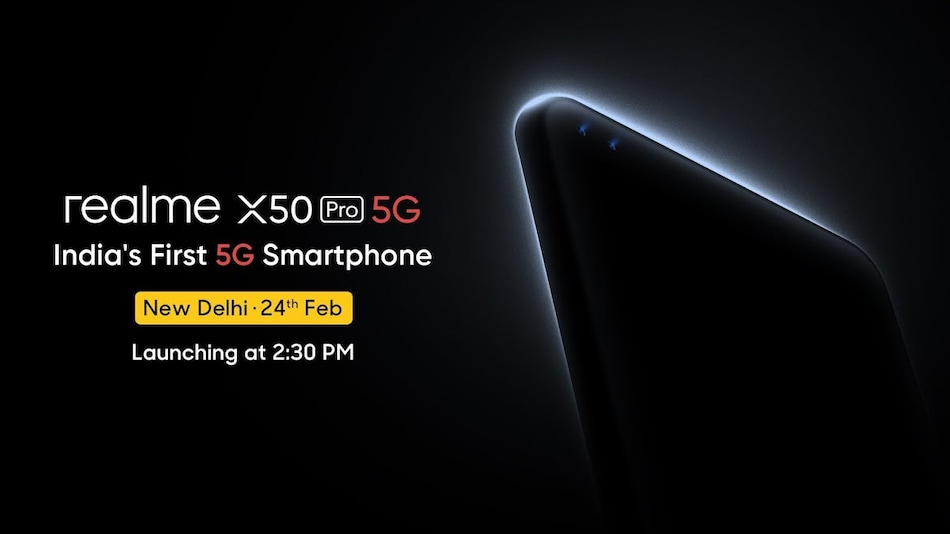 Realme X50 Pro 5G, touted to be India's first 5G phone, is all set to launch today in the country. The phone was originally scheduled to debut at MWC 2020, but following the show's cancellation over the coronavirus outbreak, the launch event has been moved to India. In the days leading up to its official debut, Realme has revealed some of its key features such as Snapdragon 865 SoC, dual-mode 5G support, 90Hz super AMOLED display, quad rear cameras, and more. If you are interested in watching the livestream, here's everything you need to know about the timings, as well as the phone's expected pricing, specifications and more.

Realme X50 Pro 5G's launch event kicks off at 2:30pm (noon) IST on February 24. It will be live streamed on Realme's official YouTube channel. More launch updates can also be checked on the official Realme Mobiles Twitter handle and the Realme event site. For Realme X50 Pro 5G event highlights and more related content from our side, stay tuned to Gadgets 360.

Realme X50 Pro 5G will reportedly be priced around the Rs. 50,000 mark in India. However, it is unclear if the aforementioned price is for the phone's base variant or its top-of-the-line model. If the leak turns out to be true, the Realme X50 Pro 5G will be the first phone from the Oppo spin-off to cross the Rs. 40,000 price boundary and enter OnePlus' territory.

As for the specifications, Realme has already revealed a fair bit about the upcoming phone's hardware via teasers. Realme X50 Pro 5G will be powered by the Qualcomm Snapdragon 865 SoC. The onboard Snapdragon X55 LTE will ensure that the phone offers dual-mode (NSA+SA) 5G connectivity. Coming to the imaging hardware, Realme X50 Pro packs a quad rear camera setup that is headlined by a 64-megapixel primary camera, complete with 20x hybrid zoom support.

Over at the front, the phone features a super AMOLED display with 90Hz refresh rate and a pill-shaped hole-punch. The latter houses two camera lenses, one of which is a 32-megapixel snapper. While the company is yet to reveal the Realme X50 Pro 5G's battery capacity, it has been confirmed to support 65W SuperDart fast charging technology. The phone will be up for grabs in Rust Red and Moss Green colour options.