Realme X3 SuperZoom will be unveiled in Europe at a digital event that will be streamed on the company’s social media channels.

Realme X3 SuperZoom, the company's upcoming smartphone, has been confirmed to come with the Snapdragon 855+ SoC and a 120Hz display ahead of its May 26 launch. The company, through its European Twitter account, shared a few posters for the Realme X3 SuperZoom with the aforementioned specifications, as well as a video revealing the design. There have been several leaks and teasers for the phone but now the company has shared some details ahead of the launch. Realme also teased the launch of its smart band and truly wireless (TWS) earphones, all of which, will be announced during the May 26 event in Europe.

One of the posters shared by Realme Europe on Twitter shows the presence of Snapdragon 855+ SoC, along with an AnTuTu benchmark score of 517,743. The other poster for the Realme X3 SuperZoom simply reveals the refresh rate of the LCD screen to be 120Hz. The short teaser video shared by the company reveals the design of the Realme X3 SuperZoom. It will feature dual front cameras, a quad rear camera setup, and will be available in two colours namely, green and white. There will be a side-mounted fingerprint scanner as well. 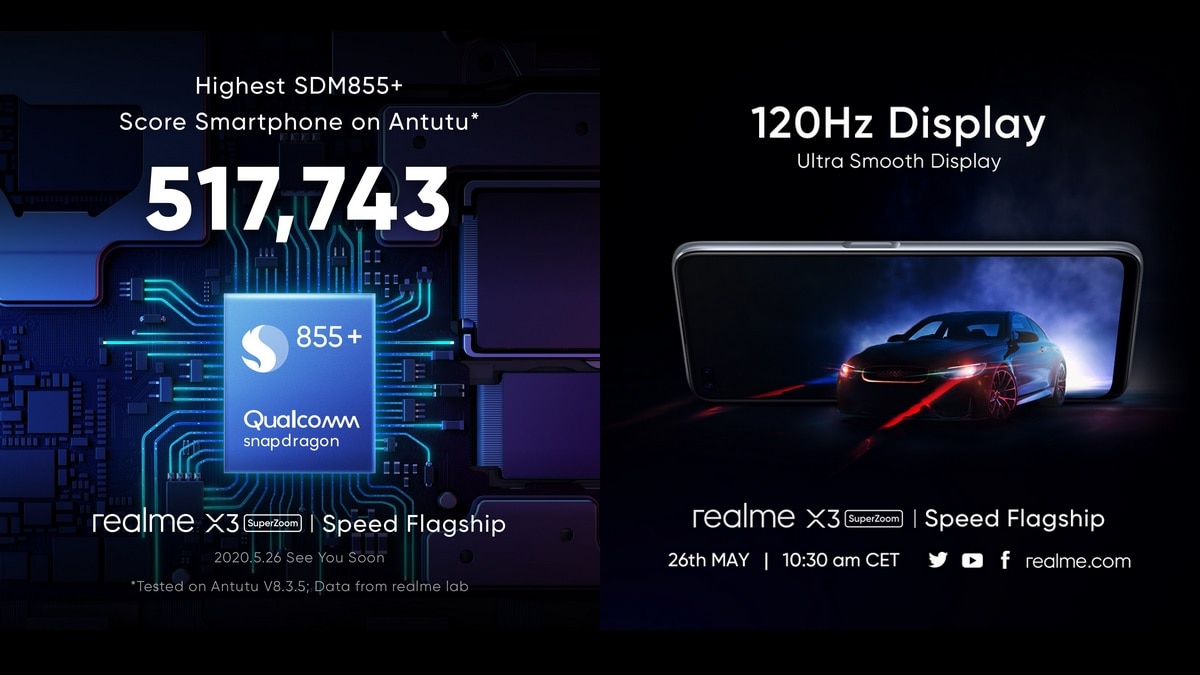 Further, the company also teased the launch of its TWS earphones, presumably the Realme Buds Air Neo and what seems to be a fitness tracker. Realme teased some of the specifications for the Realme Buds Air Neo ahead of their India launch scheduled for today, May 25, starting 12:30pm. Additionally, a new version of the Realme Band recently went on sale through Amazon and Flipkart in India. This suggests that the fitness tracker teased for the European event could be the new Realme Band.

The digital launch event for the Realme X3 SuperZoom will be held tomorrow, May 26, at 10:30am CET (2pm IST) and steamed via the company's social media channels including Twitter, Facebook, YouTube, and Realme.com.

Realme has an event planned for today, May 25, in India and China, as well as one planned for tomorrow, May 26, in Europe. Both the events will be online only and will have multiple product launches. The China event will include the unveiling of eight new products while the India event will include the Realme TV, Realme Watch, and Realme Buds Air Neo. The European event will feature the Realme X3 SuperZoom, a fitness tracker, and TWS earphones.