Realme X2 is launching in China on September 24, the company had revealed earlier this week. The smartphone is a rebranded Realmi XT 730G.

Realme X2 will debut with a Qualcomm Snapdragon 730G SoC, the Chinese company has announced through a post on Weibo. The presence of the Snapdragon 730G endorses the earlier speculation that the Realme X2 would debut in India as the Realme XT 730G. Realme has separately also showcased two different colour variants of the Realme X2. Additionally, the smartphone is confirmed to sport a 32-megapixel selfie camera alongside its 64-megapixel primary rear camera. Finally, the company also revealed it would offer 30W VOOC 4.0 fast charging tech.

To confirm the SoC of the Realme X2, Realme through its Weibo account posted a teaser image that highlights the presence of the Qualcomm Snapdragon 730G. The new chipset is based on 8nm architecture and is designed to support newer gaming experiences. In addition to the Weibo post, Realme India CMO Francis Wang through a tweet has highlighted that the Realme X2 won't be an all-new smartphone model in the Realme X series and will come as a new variant of the Realme XT that would be the Realme XT 730G.

Wang particularly emphasised on the Realme XT 730G while responding to a query regarding the absence of the Snapdragon 730G SoC from the original Realme XT that instead comes with a Snapdragon 712 SoC.

Separately, Realme through another Weibo post revealed the design and colour variants of the Realme X2. The phone appears to have both Pearl White and Pearl Blue colour options, which both were featured on the Realme XT recently.

Through a separate post on Weibo, Realme confirmed that the Realme X2 will come with 30W VOOC 4.0 Flash Charge technology that Oppo unveiled just earlier this week. The new technology is touted to enable a 4,000mAh battery to receive 67 percent of charge in 30 minutes and reach 100 percent in 73 minutes. This makes it 12 percent faster than the previous VOOC Flash Charge technology. 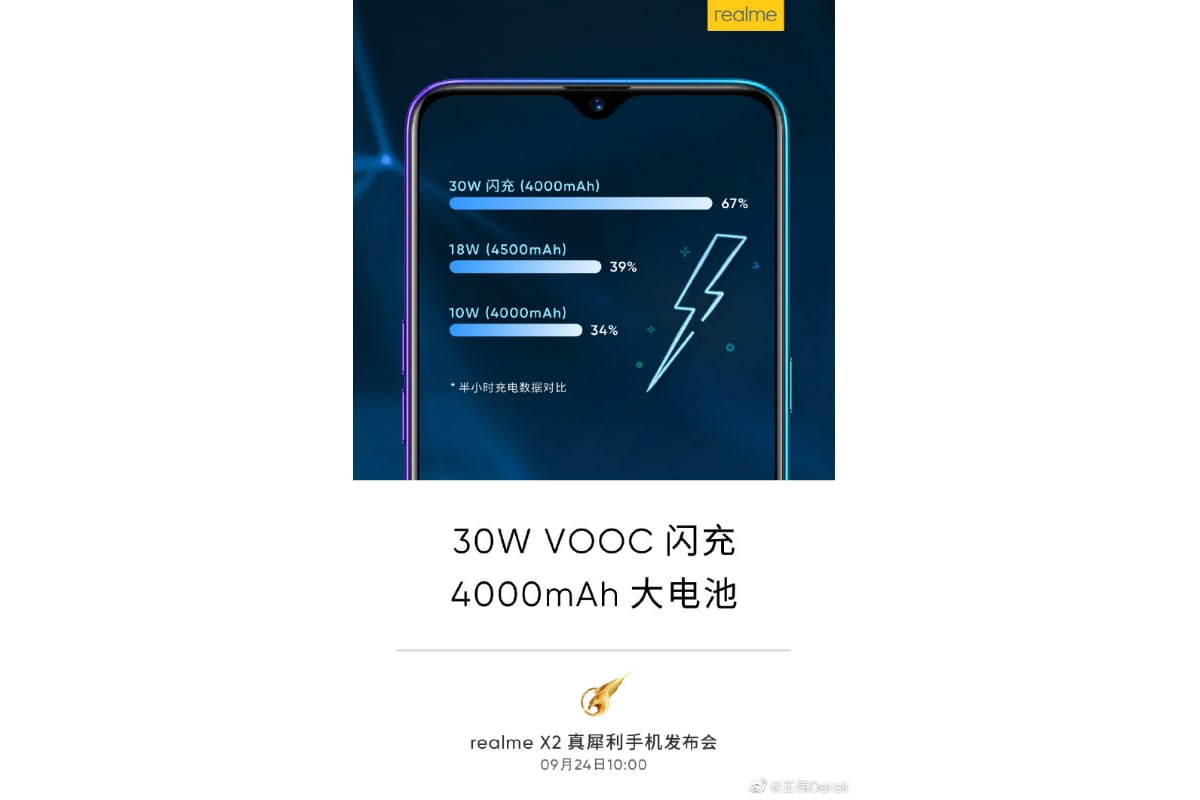 One of the key selling points of the Realme X2 is likely to be its quad rear camera setup that will include a 64-megapixel primary sensor. Further, Realme has also noted that the smartphone will sport a 32-megapixel selfie camera.

We need to wait for some days to see the formal specifications of the Realme X2. However, considering the number of teasers and details being posted by the company, it is safe to expect some more information surfacing on the Web ahead of its formal launch in China.