Realme might pull a surprise by launching the Realme 5s on November 20, alongside the Realme X2 Pro. 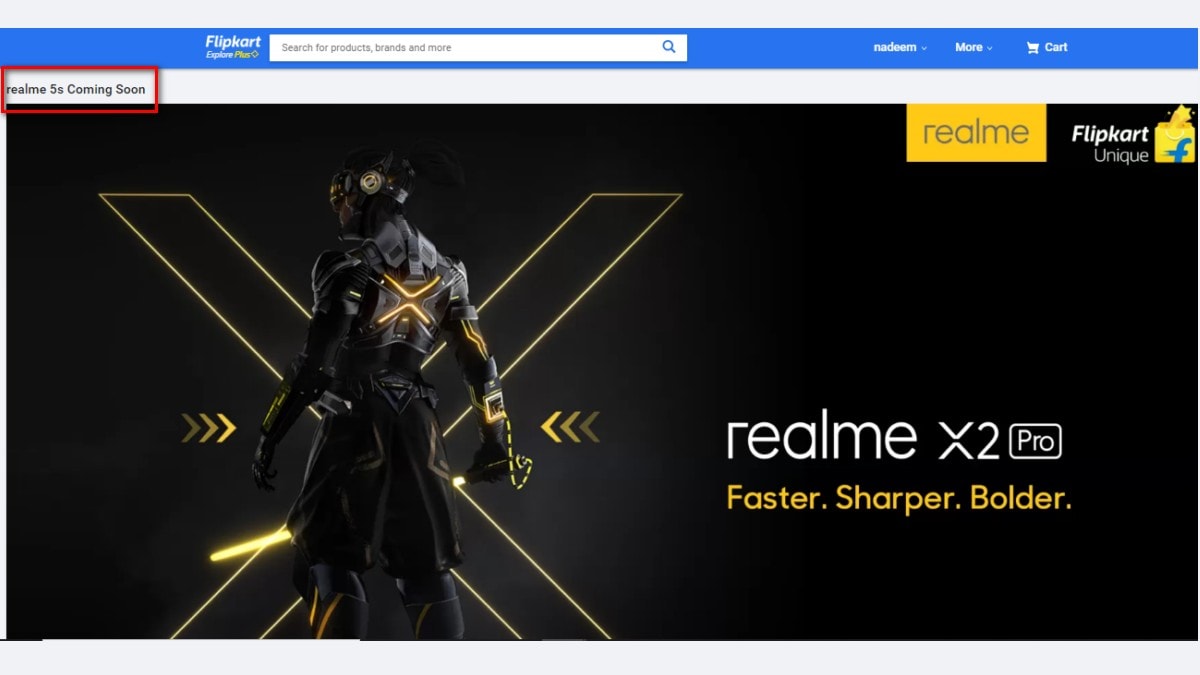 Realme recently began teasing the arrival of its first flagship phone on Flipkart, the Realme X2 Pro, which is set to launch on November 20. Now, a new microsite with the same content but a different URL has gone live on Flipkart and it teases something interesting. The top of the page now says “realme 5s Coming Soon”, which makes it clear that an updated version the Realme 5 is on the way. The Realme 5s has been making rounds of the leak arena for quite some time, and the Flipkart teaser has now pretty much confirmed its imminent arrival.

As mentioned above, the new Realme X2 Pro teaser microsite on Flipkart has a different URL and top band, but the webpage contents are the same as the older one that first started teasing the flagship phone's launch in India. The official line “realme 5s Coming Soon” in the top band leaves no doubt that the Realme 5s is indeed coming soon, but there is no word when the phone will be launched in India. However, Realme has teased some surprises at the Realme X2 Pro launch event on November 20, so the Realme 5s getting launched on the same day cannot be ruled out.

We've reached out to Realme for a confirmation regarding the Realme 5s' impending launch, and are yet to receive a response. Talking about the Realme 5s, it will be a slightly upgraded version of the Realme 5 that was launched earlier this year. The Realme 5s has already received the mandatory BIS (Bureau of Indian Standards) certification in India and the NBTC (National Broadcasting and Telecommunications Commission) certification in Thailand, indicating the phone's launch is imminent.

The Realme 5s will reportedly carry the model number RMX1925. Going by the trend of mid-cycle upgrades, the Realme 5s won't be a major upgrade in terms of hardware. As for Realme 5, it sports a 6.5-inch HD+ (720x1600 pixels) display and draws power from Qualcomm Snapdragon 665 SoC, paired with up to 4GB of RAM and 128GB of internal storage. It features a 12-megapixel primary camera, assisted by an 8-megapixel wide-angle snapper, a 2-megapixel macro lens, and a 2-megapixel depth sensor. There is a 13-megapixel selfie camera on the front, while a 5,000mAh battery keeps the lights on.