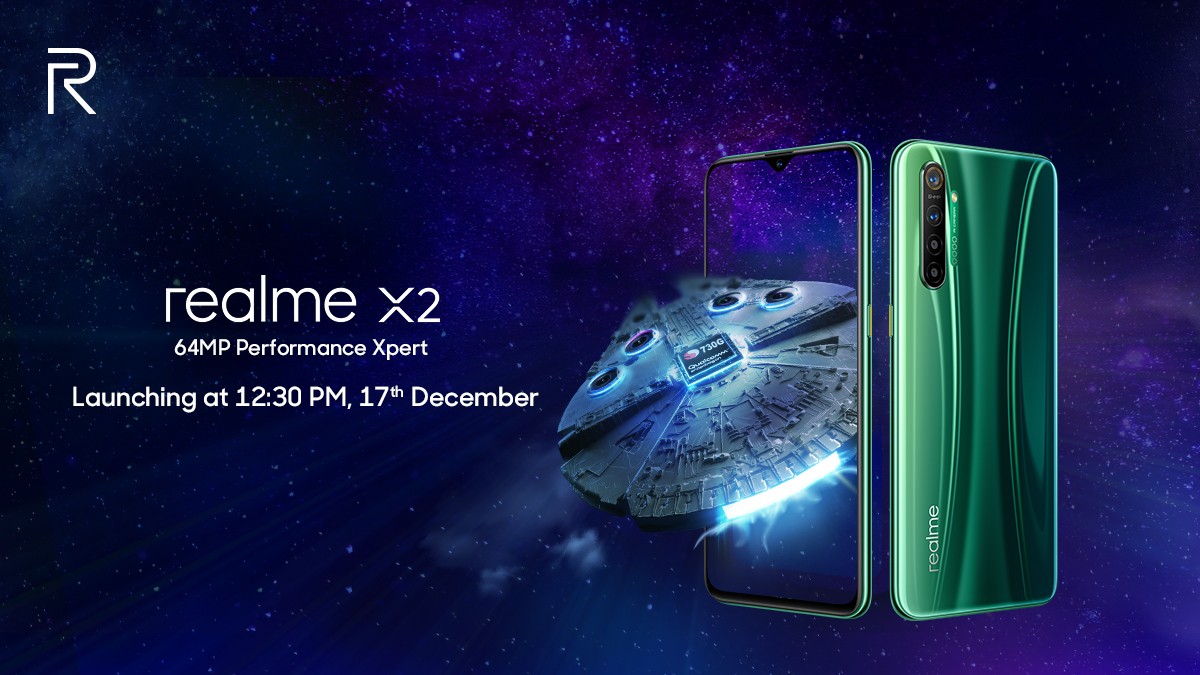 Realme X2 and Realme Buds Air are launching in India today, after weeks of teasers. The Realme X2 phone was introduced in China in September and its key features include 64-megapixel quad camera setup, Qualcomm Snapdragon 730G processor, and 4,000mAh battery with VOOC 4.0 Flash Charge support. The Chinese smartphone maker had originally revealed its plan to launch the Realme X2 aka Realme XT 730G at the Realme XT launch event in September.  Realme Buds Air, the company's first truly wireless earbuds, are touted to be heavily inspired by Apple's AirPods and will come with wilreless charging support as well as 12mm bass boost driver.

The Realme launch event will begin at 12.30pm IST today. The event will be live streamed for users on YouTube, and the company should offer all details regarding pricing and availability of the two devices. You can see the event live in the embedded video below:

A recent leak by tipster Ishan Agarwal, suggests that the Realme X2 will be priced in India at Rs. 19,999 for the 6GB RAM + 128GB storage option, and Rs. 20,999 for the 8GB RAM + 128GB storage option. If this is true, this will be the first phone that is priced under Rs. 20,000, to launch with the Snapdragon 730G SoC. The tipster also suggests that the first sale of the Realme X2 phone will be held on December 20 at 12 noon IST. We ought to mention that you must take these details with a pinch of salt, until Realme makes it all official today.

Realme has been teasing the phone on Flipkart, suggesting availability on the e-commerce site. It should go on sale on Realme.com as well. The Realme X2 phone was launched in Pearl Blue and Pearl White colour options in China, and it should arrive in the same options in India as well. However, Realme is known to make tweaks to its phones in different markets, and it could do the same with Realme X2. The phone may launch in India in different colour options, and it could arrive with different specifications as well.

Realme Buds Air price details are yet to be announced officially, but a leaked specifications list and a brief Flipkart listing suggested that it could be set at Rs. 4,999. The earbuds will be first available through an early, “Hate-to-Wait” sale that will begin at 2pm today. Realme will host the early sale through its website and Flipkart. Furthermore, the sale will take place soon after the official launch.

As mentioned, the Realme X2 has already been launched in China in September, and the phone is all set to launch in India today. If the India variant is identical to the China variant, then we can expect Realme X2 to run on Android 9 Pie with ColorOS 6 on top and feature a 6.4-inch full-HD+ (1080x2340 pixels) Super AMOLED display with 19.5:9 aspect ratio, 91.9 percent screen-to-body ratio, and a waterdrop-style notch. The smartphone's other specifications will include Corning Gorilla Glass 5 protection on the front and in-display fingerprint sensor.

Under the hood, it will have Qualcomm Snapdragon 730G SoC, coupled with 6GB and 8GB LPDDR4X RAM options. Additionally, Realme X2 packs 64GB and 128GB of onboard UFS 2.1 storage options that both are expandable via a dedicated microSD card.

Realme started teasing the Buds Air wireless earbuds starting earlier this month. The earbuds will arrive in three colour options – White, Yellow, and Black - and the design of the newly teased Realme Buds Air is similar to the AirPods. The company has teased that the wireless earbuds to sport a 12mm Bass boost driver, Bluetooth v5.0 support, and an instant auto-connection feature that just requires the user to open the case. The buds also come with intelligent touch controls to manage music and calls, and support for Google Assistant.

As per leaks, the earbuds are said to have dual microphones along with electronic noise cancellation technology to reduce ambient noise while making phone calls. Features such as wear detection, touch control, and a low latency gaming mode will be included. The earbuds are expected to pack USB Type-C port for wired charging and offer 17 hours of battery life.