Realme X is set to launch in China on May 15.

Realme X pop-up selfie camera module has been shown off clearly. The latest teaser comes just days after Realme confirmed an in-display fingerprint sensor on the Realme X. The new Realme phone is also found to have a 48-megapixel primary sensor at the back and come with a 91.2 percent screen-to-body ratio. Notably, the Realme X launch in China is set for Wednesday, May 15. The phone is likely to compete against the upcoming Redmi flagship that Xiaomi is launching soon.

Through its official Weibo account, Realme has released the new teaser image trumpeting the pop-up selfie camera of the Realme X. The teaser also highlights the in-display fingerprint sensor and an almost bezel-less display panel, which will come with a 91.2 percent screen-to-body ratio.

The fresh teaser image also suggests at least two distinct colour options of the Realme X -- along with gradient finishes. Further, the back of the phone appeared in the teaser has a Realme logo and the absence of a traditional fingerprint sensor. A dual rear camera setup can also clearly be seen from the teaser image. 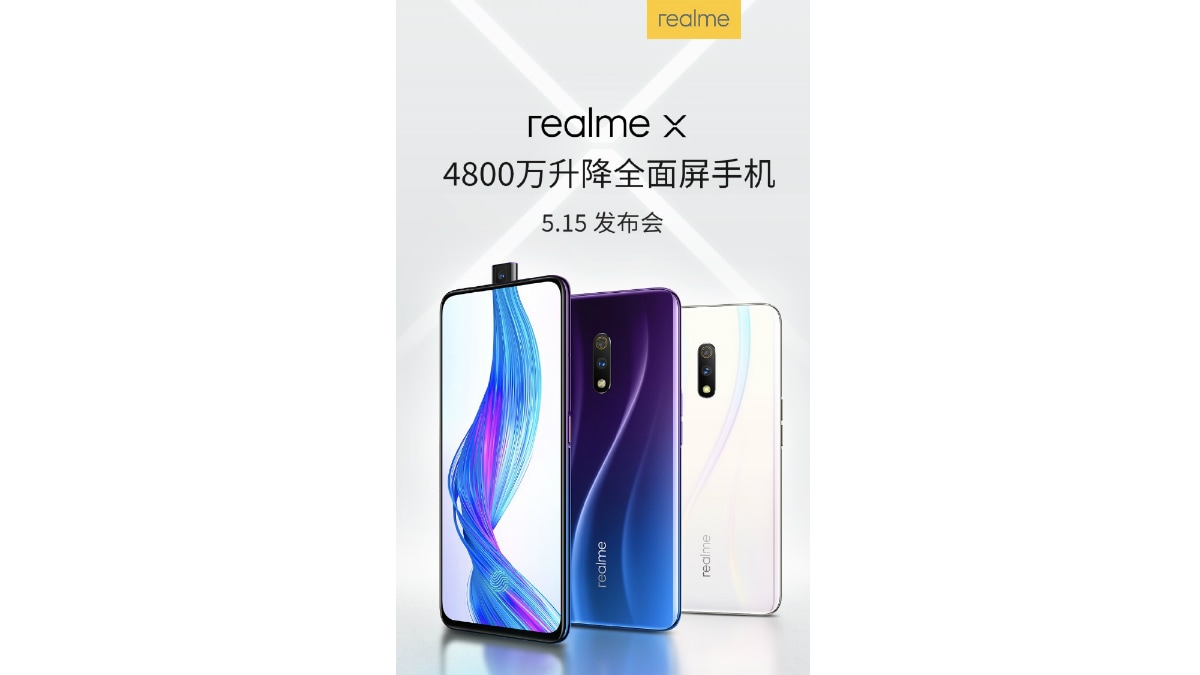 A recent teaser of the Realme X confirmed its pop-up selfie camera. It also claimed that the selfie camera mechanism on the new Realme phone has a life-cycle of 200,000 lifts.

In addition to the Realme X, Realme is likely to bring the Realme X Youth Edition. The affordable variant could have a waterdrop-style display and a dual rear camera setup.

A recent TENAA listing suggested that the Realme X would run Android Pie with ColorOS 6.0 OS and have a 6.5-inch full-HD+ (1080x2340 pixels) AMOLED display. It is also found to have a 2.2GHz octa-core processor, coupled with 4GB of RAM and 6GB of onboard storage.

The Realme X formal launch in China is taking place on May 15. However, India launch details and price of the new phone are yet to be announced officially.