Realme took to Weibo to announce the launch date of the Realme V5.

Realme V5 is set to launch in China on July 27, the brand announced in a teaser on Weibo. The upcoming phone will mark the debut of the Realme V-series. The last teaser shared by Realme CMO Xu Qi Chase gave us a glimpse of the phone, and now two Realme phones with model numbers RMX2111 and RMX2112 has been spotted on TENAA certification site as well. The new listings, believed to be of the upcoming Realme V5, offer more details on the phone's specifications just days ahead of the launch.

The company has taken to Weibo to announce that the Realme V5 will be launched in China on July 27. The teaser video reveals the launch date and also shows glimpses of the device. The back has an L-shaped quad camera setup inside a rectangular module. Apart from this, little else is revealed in the latest teaser.

Separately, two new TENAA listings with model number RMX2111 and RMX2112 have been spotted. These listings have images that are identical to the Realme V5 design teased recently. Furthermore, tipster Digital Chat Station has also leaked key specifications of the Realme V5, which match with the specifications listed on the TENAA site. All of this suggests that the two new TENAA listings may be the upcoming Realme V5. 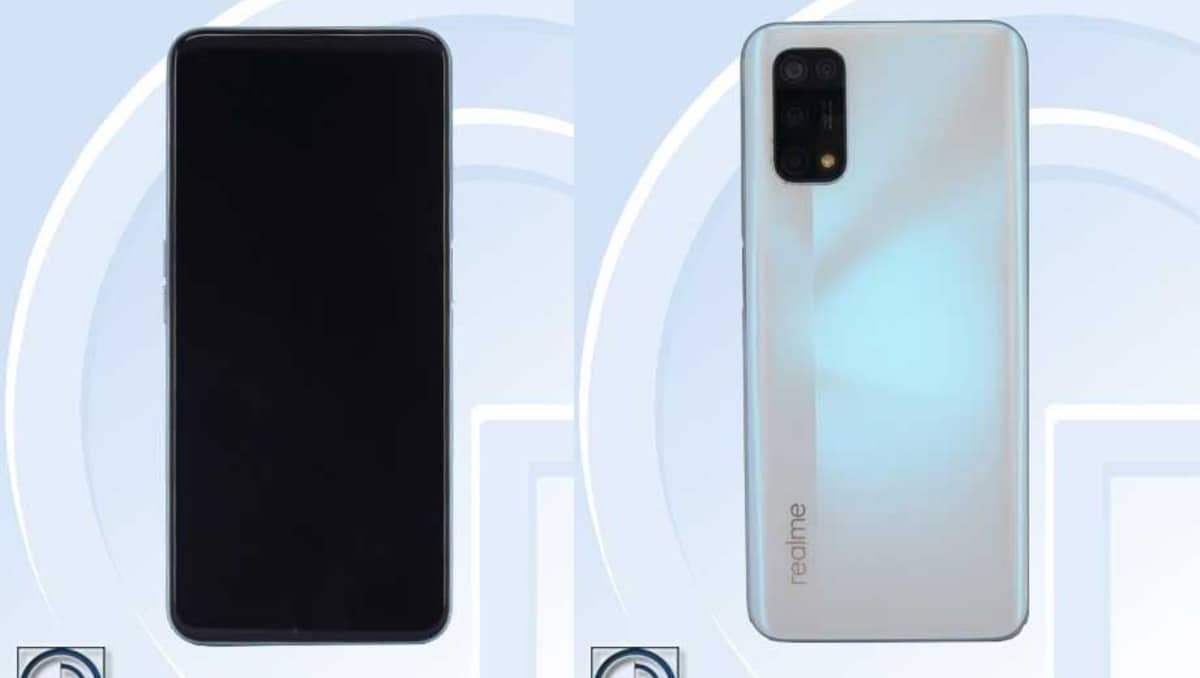 Realme V5 has been spotted on TENAA with model numbers RMX2111 and RMX2112
Photo Credit: TENAA

The TENAA listings suggest that the Realme V5 may sport a hole-punch display with the cutout placed on the top left of the screen. At the back, the Realme V5 is seen with the same inverted L-shaped rear camera setup that is seen in the launch date video teaser. The volume buttons are on the left side of the display, and the power button should presumably be on the right spine.

As for specifications, the TENAA listing suggests that the Realme V5 may run on Android 10 based on Realme UI and feature a 6.5-inch full-HD+ (1,080x2,400pixels) display with 20:9 aspect ratio. It is listed to be powered by a 2GHz octa-core MediaTek Dimensity 800 or Dimensity 720 SoC and pack 6GB and 8GB RAM options. Internal storage options are listed to be 128GB and 256GB. The RMX2111 model also lists an additional 64GB option as well. Apart from that, the Realme V5 is tipped to support storage expansion via microSD card (up to 256GB).

As for the camera, the RMX2111 and RMX2112 models are expected to offer a quad camera setup with a 48-megapixel main sensor, an 8-megapixel secondary sensor, and two 2-megapixel additional cameras. Up front, the Realme V5 is tipped to feature a 16-megapixel selfie sensor.

The TENAA listing suggests a 4,900mAh battery, dimensions are listed at 162x75.1x9.1mm, and the weight of the phone is tipped to be at 194 grams. Listed connectivity options include 5G NSA/SA, 4G LTE, Bluetooth, USB, more.

Further reading: Realme V5, Realme V5 specifications, Realme V5 Launch, Realme, Realme V5 Design
Tasneem Akolawala Email Tasneem
Tasneem Akolawala is a Senior Reporter for Gadgets 360. Her reporting expertise encompasses smartphones, wearables, apps, social media, and the overall tech industry. She reports out of Mumbai, and also writes about the ups and downs in the Indian telecom sector. Tasneem can be reached on Twitter at @MuteRiot, and leads, tips, and releases can be sent to tasneema@ndtv.com. More
iPhone 11 Now Being Made Locally in India: Piyush Goyal