A listing has reportedly been spotted of a new Realme phone with flagship-like specifications.

Realme X2 recently debuted as Realme's latest smartphone for the Chinese market. The handset sports a quad rear camera setup to please customers, but it doesn't offer any high-end specifications to compete against the likes of the Redmi K20 Pro and OnePlus 7 Pro. However, it appears that the company does have a new smartphone model in the pipeline with the premium Snapdragon 855 SoC to take on the competition. The new Realme phone with model number RMX1931 has reportedly been spotted on the Bluetooth SIG website with key specifications. Another Realme handset with model number RMX1993 has also surfaced on the Bluetooth certification site as well as the Wi-Fi Alliance portal.

The Realme phone with model number RMX1931 is listed on the Bluetooth SIG site with a 6.55-inch full-HD display, as reported by technology blog Nashville Chatter. The phone is also said to include an octa-core Qualcomm processor clocked at 2.84GHz. This could be the Snapdragon 855 SoC.

As per the reported listing, the mysterious Realme phone runs ColorOS 6.1 and has features such as Bluetooth v5.0, dual-band Wi-Fi, and a fingerprint sensor.

If we go by the said specifications, the new smartphone could be Realme's answer to the Redmi K20 Pro. We were, however, not able to independently verify the listing on the Bluetooth SIG website. Thus, it is safe to take the development with a pinch of salt.

Alongside the premium-looking Realme phone, the company seems to have another smartphone in the pipeline -- with model number RMX1993. The handset is reportedly listed on the Bluetooth SIG site. Also, we are able to spot its certification on the Wi-Fi Alliance site that confirms its presence with Android 9 Pie and dual-band Wi-Fi support. 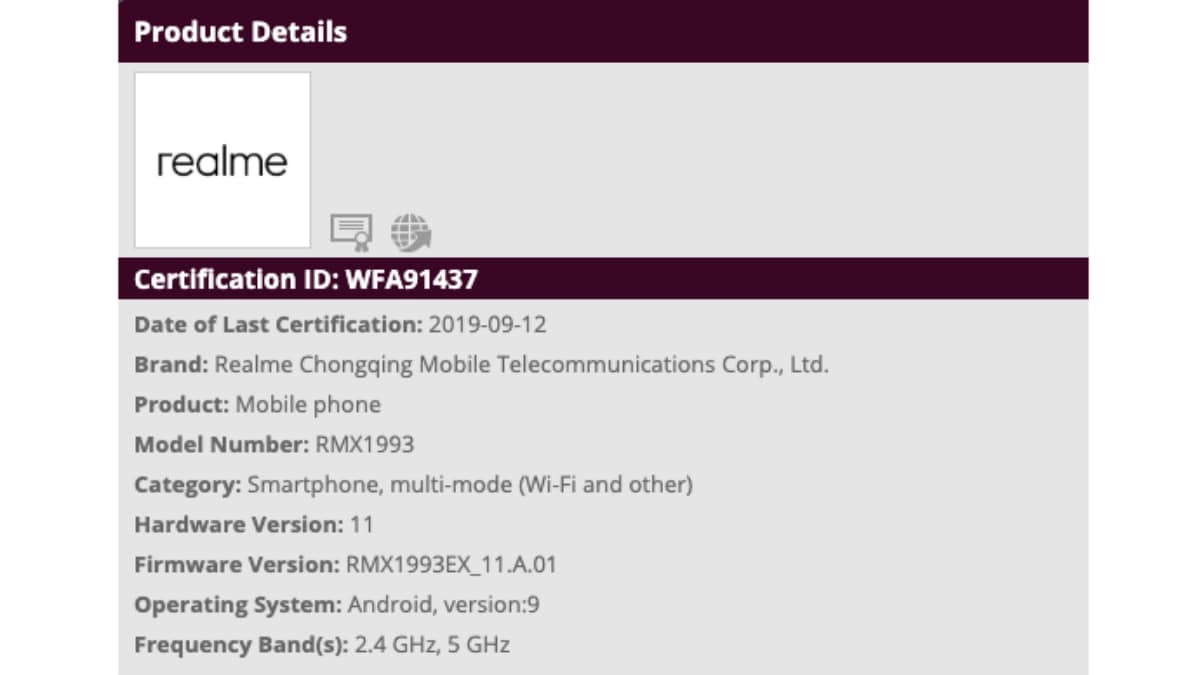 The listing on the Wi-Fi Alliance site shows September 12 as the certified date. This means that the handset is a new Realme phone.

Powered by the Qualcomm Snapdragon 730G SoC, the Realme XT 730G will debut in December. It is expected as the India variant of the Realme X2, which was unveiled in China just earlier this week.