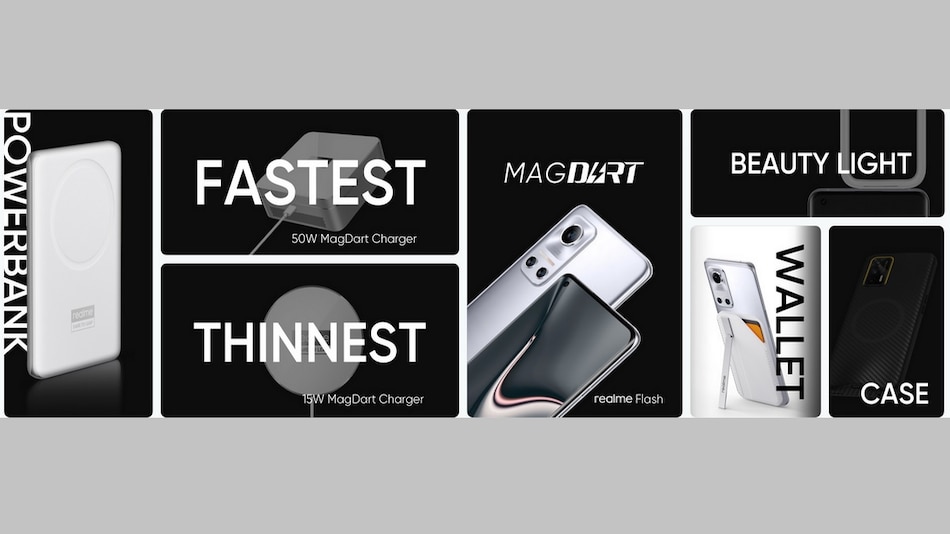 Realme 50W MagDart Wireless Charger has ventilation grills around it

Realme MagDart wireless fast charging tech has been unveiled and it brings magnetic wireless charging to Android. Realme MagDart works in a similar fashion as Apple's MagSafe, but delivers much higher speeds. Realme has announced a 50W MagDart Wireless Charger, a 15W MagDart Charger, and a MagDart Power Bank, along with a few other accessories that work with MagDart technology. It showed off the technology with a concept phone called Realme Flash, which the company is calling the first Android phone to feature magnetic wireless charging.

MagDart is Realme's magnetic wireless charging technology that simply attaches to the back of an Android phone with the help of magnets and starts charging it wirelessly, so to speak. The MagDart charger still needs to be connected via a wire, just like Apple's MagSafe. There is a 50W MagDart Wireless Charger, a 15W MagDart Charger, and a MagDart Power Bank in the ecosystem, along with peripherals such as MagDart Wallet, MagDart Beauty Light, and MagDart case specifically for the Realme GT.

The 50W MagDart Wireless Charger is a thick cuboid with a USB Type-C port on one side and vents on the sides and bottom. It is capable of delivering 50W charging speed and is claimed to be the fastest magnetic wireless charger. OnePlus also offers 50W wireless charging with its Warp Charge 50 Wireless Charger, but it is not magnetic. Realme's 50W MagDart Wireless Charger features active cooling with a compact cooling fan and comes with 1.5mm magnets. It works with the Realme Flash concept phone which is not available to the public.

The Realme 15W MagDart Charger is a more traditional charging puck that is just 3.9mm thick and has the same charging speed as Apple's MagSafe. It comes with a non-removable cable.

MagDart Power Bank, as the name suggests, is a portable power bank that is small enough to just stick to the back of the Realme Flash and charge it wirelessly. It supports two-way charging so the power bank itself can be placed on a wireless charger to juice up. There is also a charging base that allows the MagDart Power Bank to be oriented vertically.

In terms of accessories, the MagDart Wallet is said to be made with hard-wearing white vegan leather and hold up to three cards. It simply sticks to the back of the phone with magnets and also has a kick-stand built-in. The MagDart Beauty Light is another magnetic attachment that comes with a light 'ring' that has 60 LEDs and flips up to illuminate your face while taking selfies. It works just by snapping onto the phone and using wireless charging. Lastly, the MagDart Case for Realme GT makes the phone that launched with just wired charging back in March to be compatible with magnetic wireless charging. Though, it doesn't seem like all of MagDart accessories will work with it since it has a bulge at the bottom.

As for the Realme Flash concept phone, it just seems to be a means for showcasing the MagDart tech and it is unclear if the company plans on releasing it as is, or in some other form, to the market. It is also unclear when the MagDart chargers and accessories will hit the shelves and how much they will cost, but the company is expected to share those details in the near future.