Moto Edge X30 is launching with the new Snapdragon chip as early as next week. 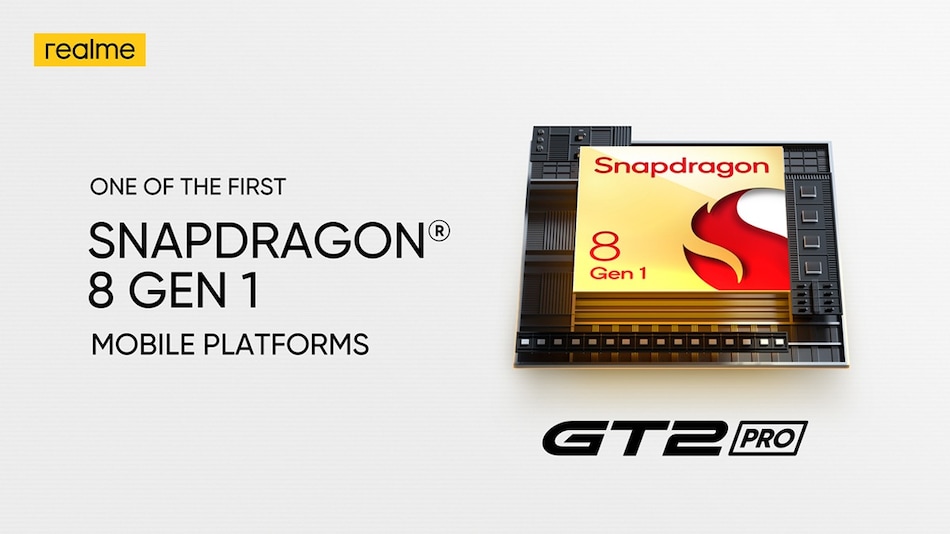 Realme GT 2 Pro, Xiaomi 12, and Moto Edge X30 are the first phones confirmed to come with Qualcomm's newly launched Snapdragon 8 Gen 1 SoC. While Realme and Xiaomi have not revealed the exact launch dates of their new flagships, Motorola has announced that the Moto Edge X30 will debut on December 9. The new Motorola phone is rumoured to have up to 512GB of onboard storage and come with a 144Hz OLED display.

Shortly after Qualcomm launched the Snapdragon 8 Gen 1, Realme announced at the Snapdragon Tech Summit 2021 on Wednesday that it is set to bring the Realme GT 2 Pro with the new SoC. The Chinese company said that it started the development of its new flagship a few months ago.

Exact details about the Realme GT 2 Pro are yet to be officially announced, though the company claimed that the phone will deliver a next level of user experience, in terms of gaming, artificial intelligence (AI) capabilities, and 5G, through the Snapdragon 8 Gen 1 SoC.

The rumour mill suggested that the Realme GT 2 Pro will come with a 120Hz display and include up to 512GB of internal storage. It is also claimed to be available with a price tag of around $799 (roughly Rs. 59,900) and is tipped to arrive in India in the first quarter of 2022.

Some renders suggesting the design of the Realme GT 2 Pro indicated a horizontal camera bar at the back. The renders also suggested a GR Lens available alongside the dual rear cameras to help reduce ghosting effect.

Xiaomi also tweeted that the Xiaomi 12 as its first flagship to come with the Snapdragon 8 Gen 1 SoC. The smartphone may come alongside the Xiaomi 12X and both may be upgradable to the company's next-generation MIUI 13 out-of-the-box.

It is rumoured to have a 50-megapixel primary camera.

Following the initial tweet, Xiaomi posted a video teaser on Twitter that confirms the starting of mass production of the Xiaomi 12 series with Snapdragon 8 Gen 1.

Take a sneak peek of the most potent @Snapdragon 8 Gen 1 chipset that will power our upcoming #Xiaomi12Series! #InnovationForEveryone pic.twitter.com/YrNqM8beMN

Similar to Realme and Xiaomi, Motorola has confirmed that the Moto Edge X30 is coming with the Snapdragon 8 Gen 1 SoC. The Lenovo-owned company has gone a step ahead and revealed through a teaser posted on Weibo that the smartphone will be launched in China at 7:30pm CST Asia (5pm IST) on December 9.

The Moto Edge X30 was recently teased by a Lenovo executive on Weibo. The executive said that the phone will have Corning Gorilla Glass protection on both its front and back sides and will be the first to run on MyUI 3.0 based on Android.

Aside from the Realme, Xiaomi, and Motorola, Qualcomm announced that companies including Black Shark, Honor, iQoo, Nubia, OnePlus, Oppo, Sharp, Sony, Vivo, and ZTE are working on bringing their flagships with Snapdragon 8 Gen 1 that will start hitting the market by the end of 2021.

Realme India CEO Madhav Sheth joins Orbital, the Gadgets 360 podcast for an exclusive wide-ranging interview, as he talks about the 5G push, Make in India, Realme GT series and Book Slim, and how stores can improve their standing. Orbital is available on Spotify, Gaana, JioSaavn, Google Podcasts, Apple Podcasts, Amazon Music and wherever you get your podcasts.
Affiliate links may be automatically generated - see our ethics statement for details.