Realme C3 to Launch in India Today: Expected Price, Specifications, and How to Watch Live Stream

Realme C3 has been confirmed to employ the MediaTek Helio G70 SoC. 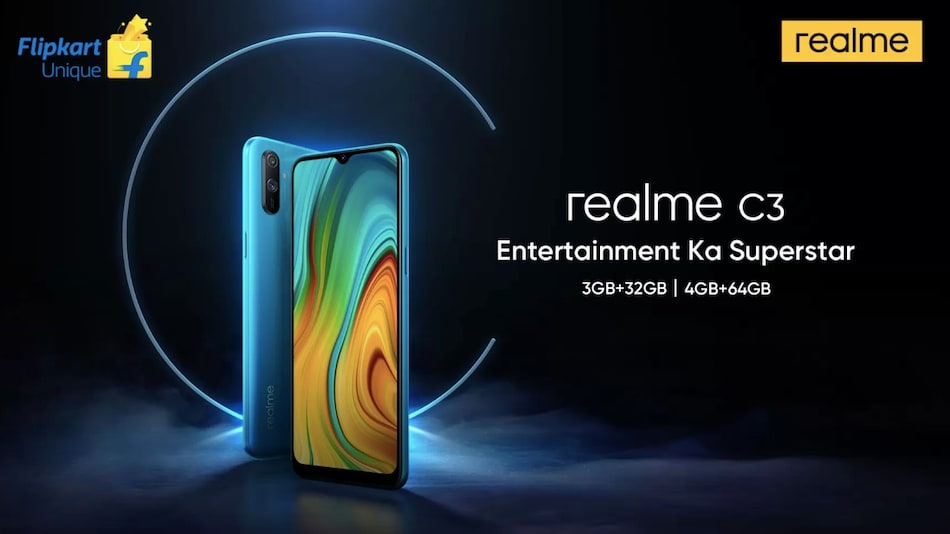 Realme C3 is all set to go official today as the next entry-level Android phone from the company. The phone succeeds the Realme C2 and has already appeared in teaser images, giving us a glimpse of its design prior to the official launch. The phone will pack dual rear cameras and will draw power from the freshly-launched MediaTek Helio G70 SoC. A few other hardware specifications have also been revealed by the company in the days leading up to the Realme C3's unveiling. Here's how you can watch the livestream and everything we know about the phone so far:

Realme C3: How to watch the livestream?

The Realme C3's India launch event will kick off at 12:30pm IST and will be live streamed on the company's official YouTube channel on this page. Users can also tune in to the Realme India Facebook page and the official Twitter handle (@realmemobiles) for live updates. As always, stay tuned to Gadgets 360 for live updates from the event.

We can expect the Realme C3 price in India to be slightly higher than that of the Realme C2 at launch. To recall, the budget Realme C2 was launched in India in April last year, and was priced at Rs. 5,999 for its base model with 2GB of RAM and 16GB of inbuilt storage. Considering that the new smartphone will run on the more powerful, gaming-focused SoC - the MediaTek Helio G70 - and also features a much larger 5,000mAh battery, we can expect the base model will be priced a little higher, at Rs. 6,999 or Rs. 7,999. We don't have too long to wait till the Realme C3 price in India is revealed, and urge you to stay tuned to Gadgets 360 for all the details from the launch event.

Realme C3 has been confirmed to pack a 6.5-inch display with a waterdrop notch and 89.8 percent screen-to-body-ratio. The phone's LCD panel is protected by a layer of Corning Gorilla Glass. Talking about the hardware under the hood, the Realme C3 will rely on the MediaTek Helio G70 SoC, which has two Cortex-A75 cores clocked at 2GHz and six Cortex-A55 cores ticking at 1.7GHz. The MediaTek SoC will be paired with 3GB or 4GB of RAM depending upon the configuration.

In the imaging department, the Realme C3 will offer a dual rear camera setup that includes a 12-megapixel main shooter and a 2-megapixel depth sensor. Realme has so far confirmed camera features such as Chroma Boost, slow motion video capture, HDR mode, and panorama selfie. There is no word on the resolution of the front camera as of now. The light will be kept on by a 5,000mAh battery that is said to last 20.8 hours of YouTube streaming and 43.9 hours of talk time. We'll get to know more when the Realme C3 goes official tomorrow.