Realme C11 Teased on Retail Site Ahead of Launch, Renders and Specifications Revealed

The Realme C11 will be launched in two colour options – Mint Green and Pepper Grey. 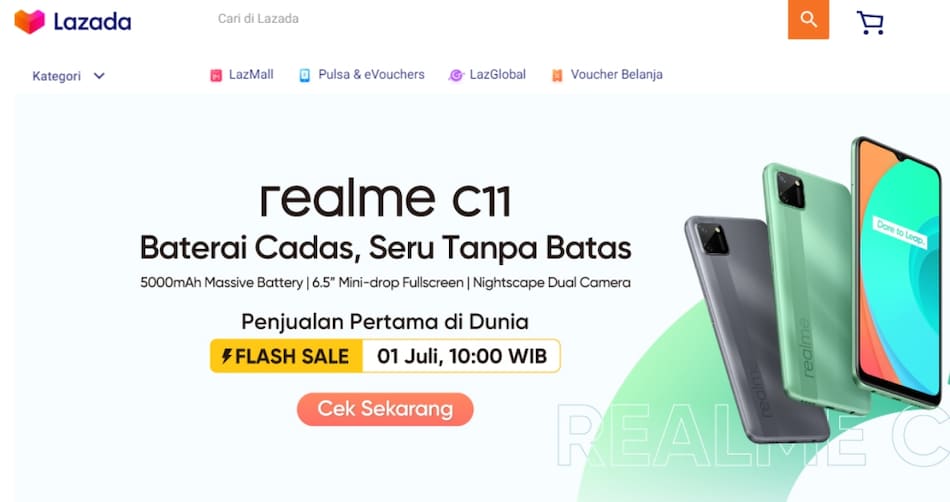 Realme C11 will be available via flash sale from July 1

Realme C11 is set to debut on June 30 and ahead of the launch the phone has been teased on retail site Lazada, revealing key specifications, colour options, and design. The phone is listed to go on sale on Lazada on July 1, and Mint Green and Pepper Grey colour options of the Realme C11 are revealed. The company earlier confirmed that the Realme C11 will be powered by the MediaTek Helio G35 SoC, and this new retail listing confirms most of the other specifications.

The Realme C11 phone is teased to be exclusively available on Lazada site. The ecommerce site suggests that the phone will go on flash sale on July 1, a day after its launch. The Realme C11 is listed to be made available in Mint Green and Pepper Grey colour options. It will be launched in two configurations – 2GB + 32GB and 3GB + 32GB. Its pricing still remains a mystery.

The phone comes with a dual rear camera setup inside a square shaped module that also houses the flash, while on the front there's a waterdrdop-style notch for the selfie camera. There seems to be no rear fingerprint scanner on the Realme C11.

The Lazada site reveals that the dual-SIM Realme C11 has a 6.5-inch waterdrop-style notch display and confirms that it is powered by the MediaTek Helio G35 SoC paired with up to 3GB RAM. Internal storage is at 32GB, but the phone offers dedicated microSD card support for further expansion.

As per the listing, the Realme C11 has dual cameras at the back with a 13-megapixel main sensor and another 2-megapixel sensor. Features include chroma boost, portrait mode, video slo-mo, and 1080p video. There is also a super nightscape mode for better low-light photography. The Realme C11 is listed to run on Android 10, support Face Unlock, and have a large 5000mAh battery.