Realme 6i appears to run Android 10 out-of-the-box and include MediaTek Helio G70 SoC.

Realme 6i has supposedly surfaced on benchmark site Geekbench just weeks after paying a visit to the US FCC. The smartphone has made its latest appearance with a model number RMX2040. The online listing suggests some of its key specifications and hints at its performance results. Alongside the Realme 6i, another Realme phone has surfaced on the Geekbench site with a model number RMX2063. This could be another variant in the Realme 6 series. Some past reports have also suggested the existence of the unannounced Realme phone.

The Geekbench listing of the Realme model RMX2040, which is believed to be the Realme 6i, provides some of its specification details. It shows that the phone runs Android 10 and is powered by an MT6769V SoC, which could be MediaTek Helio G70 SoC. The Realme smartphone also appears to have 4GB of RAM.

Realme hasn't yet confirmed the launch of the Realme 6i. However, the Geekbench site also suggests its performance results by showing 345 as a single-core score and 1,293 as a multi-core score. The listing carries March 11 as the upload date.

Just like the presence on Geekbench, the FCC listing of Realme 6i that was spotted last month also suggested some of its specifications. The earlier revelation showed the phone with the same RMX2040 model number and suggested its a waterdrop-style display notch as well as a quad rear camera setup. It also tipped a 5,000mAh battery and ColorOS 7.0. 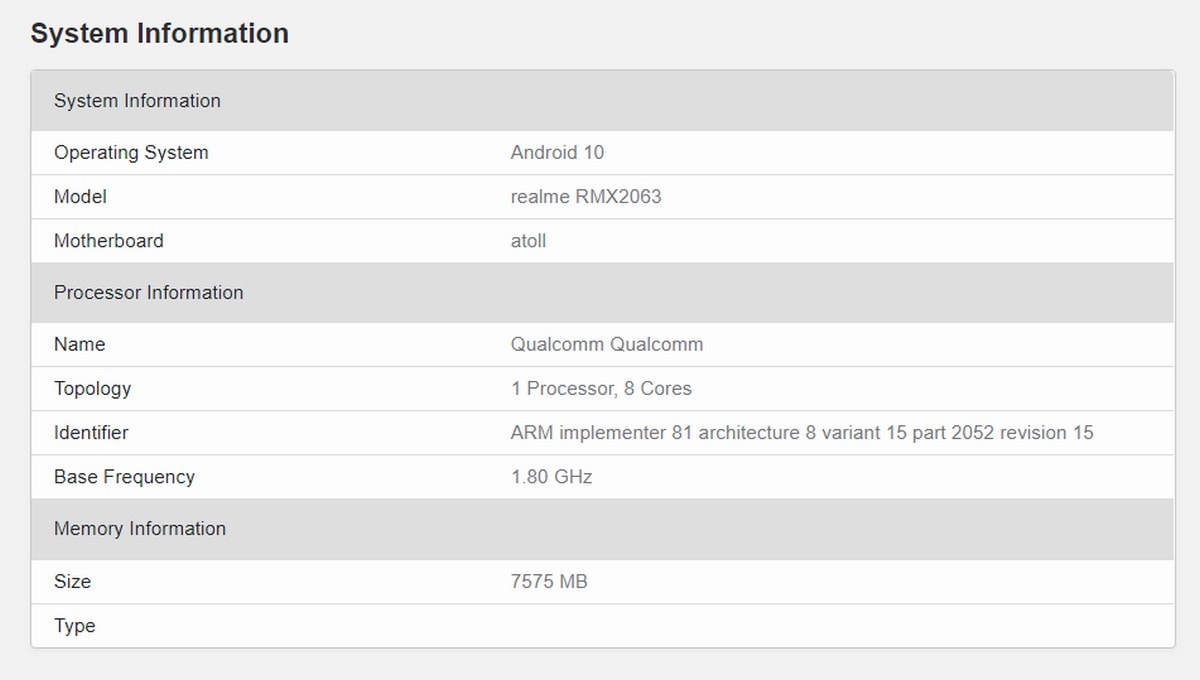 Alongside the purported Realme 6i, the Geekbench site has a separate listing for the Realme phone carrying the model number RMX2063. It shows the phone with Android 10 and an unnamed Qualcomm SoC that has a base clock speed of 1.8GHz. The listing also includes 570 as the single-core score and 1,683 as the multi-core score of the unannounced Realme phone. Furthermore, it also has March 11 as the upload date, just like what's available on the listing of the alleged Realme 6i model.

This is notably not the first time when we're seeing a Realme phone with the model number RMX2063. Some of its references were found on the US FCC site in January. The was earlier believed to be a variant of the Realme 6 Pro.

Since Realme hasn't yet made any official announcements pertaining to the handsets surfaced on Geekbench, it is safe to consider the surfaced listings on Geekbench with a bit of scepticism.