Realme Myanmar Facebook page has carried a couple of teasers to reveal the key features of Realme 6i ahead of its official debut.

Realme 6i is set arrive with MediaTek Helio G80 SoC

Realme 6i release date is set for March 17. Realme has announced the launch of its new smartphone through its Facebook page in Myanmar. The new development comes months after the Realme 6i surfaced on certification sites in Thailand and the US. The smartphone was also recently spotted on benchmark portal Geekbench. The Realme 6i is apparently in the works with model number RMX2040. Considering the historical records of the company, it is expected to be a toned down version of the Realme 6 that was launched in India last week -- alongside the Realme 6 Pro.

The official Realme Myanmar page on Facebook revealed the launch date of the Realme 6i in the country by updating its cover photo, as noticed by technology blog IndiaShopps. The cover photo shows that the launch will take place at 3pm MMT (2pm IST) on Tuesday, March 17. It also highlights the presence of MediaTek Helio G80 on the new smartphone.

Last month, MediaTek launched the Helio G80 as its latest gaming and graphics focussed octa-core SoC with HyperEngine technology. The chip includes two Cortex-A75 cores with a maximum clock speed of 2GHz and six Cortex-A55 cores clocked at 1.8GHz. It also supports up to 8GB of LPDDR4X RAM and eMMC5.1 storage.

The Facebook page also confirms 18W Quick Charge support on the Realme 6i that is touted to deliver 38 percent faster charging results than the standard 10W charging technology. The phone will also have a USB Type-C port -- an upgrade over the Micro-USB port available on the Realme 5i. Further, another teaser posted on the social media site shows a quad rear camera setup on the Realme 6i with a 48-megapixel primary sensor. 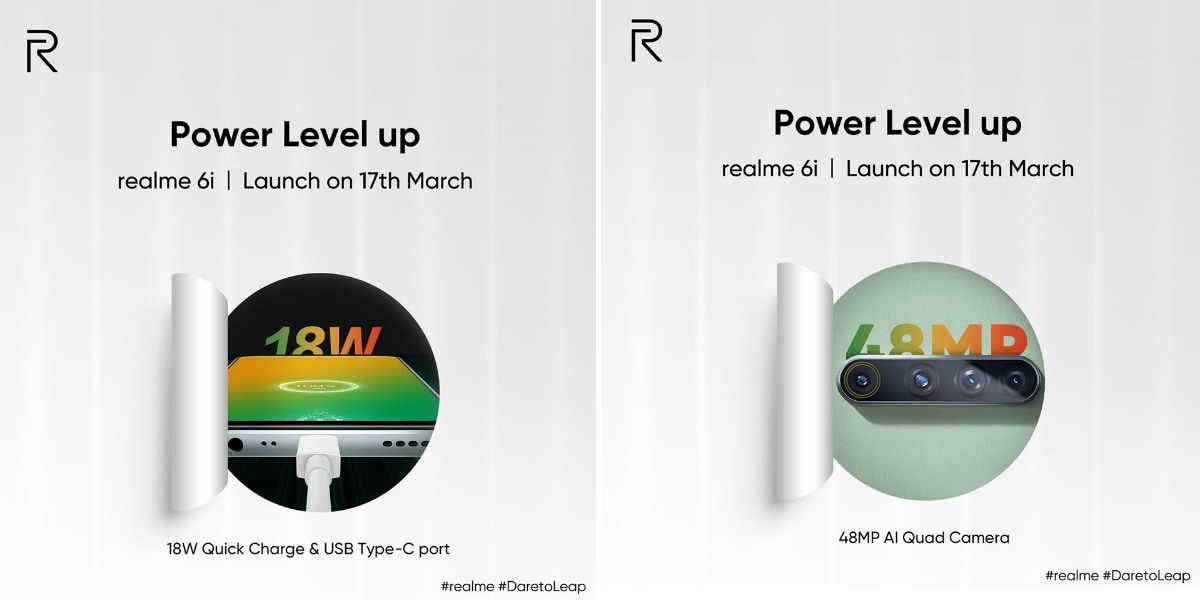 Realme 6i teasers have been released ahead of its official launch
Photo Credit: Facebook/ Realme Myanmar

If we believe the recently spotted listing on the Geekbench site, the Realme 6i will come with at least 4GB of RAM and run Android 10 out-of-the-box. The smartphone appeared on the benchmark portal with model number RMX2040 that was also featured on the US FCC site last month.

Alongside FCC, the Realme 6i apparently received a certification from Thailand's The National Broadcasting and Telecommunications Commission (NBTC) with the same RMX2040 model number.

Realme hasn't yet announced whether it would bring the Realme 6i to markets other than Myanmar anytime soon. Nevertheless, the fast growth and vast consumer base of the Chinese company in India would convince it to launch the new phone at least in the country shortly after its debut in the Myanmar market.