Realme 6i update brings power optimisations apart from other changes

The Realme 6i is the latest smartphone from Realme to launch in India and is getting its first update. The new update has the RMX2002_11_B.41 build number and is 309MB in size. It brings the July 2020 Android security patch and fixes an audio-video sync issue for recorded clips. The changelog also lists optimisations for power consumption and the changelog also notes that Bluetooth status will no longer be toggled when enabling Flight mode. This update also adds Serbian language on the Realme 6i. We have received this update on our review unit. 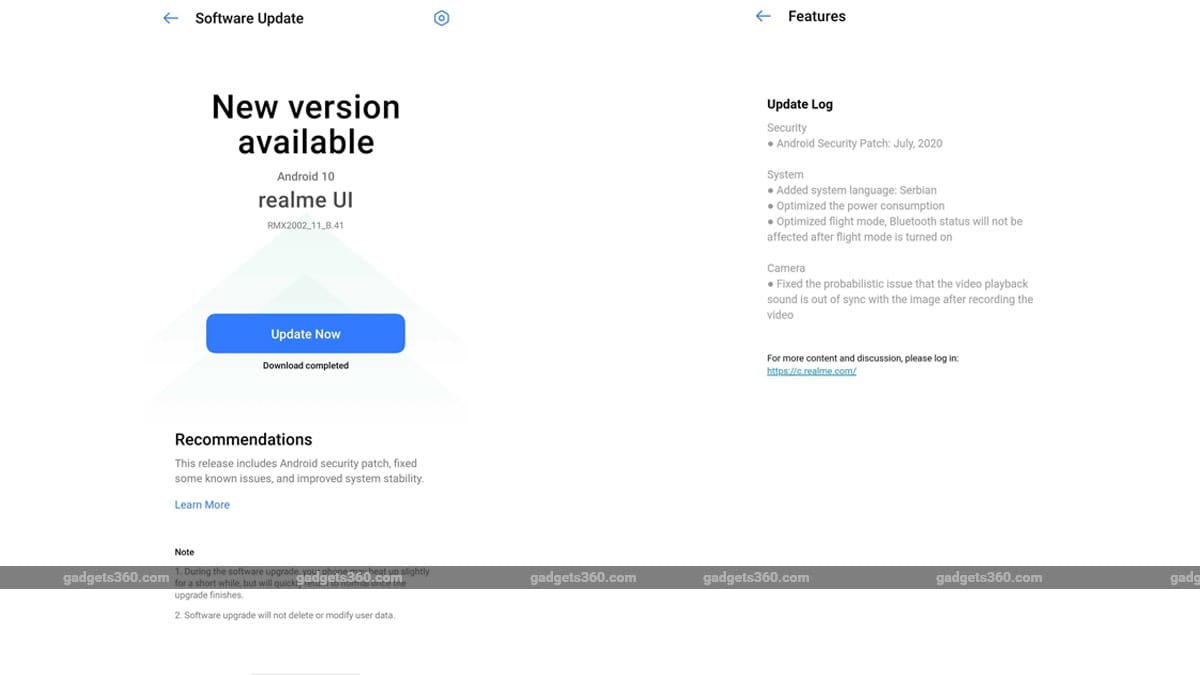 Realme 6i is receiving a new software update

Realme X3 and the Realme X3 SuperZoom are also getting the July 2020 Android security patch with the RMX2081PU_11.A.39 update. This software update also brings bug fixes such as the voice issue when connected to Bluetooth headsets using LDAC codec, time display issue in the status bar and reduced screen brightness in power saving mode. The update also optimises power consumption and optimises Flight mode so that it doesn't switch Bluetooth off when enabled.

The updates are reaching these Realme smartphones in a phased manner and you will get a notification when an update is available for your device. Alternatively, you can look for an update by going to Settings > Software Update.

Further reading: Realme, Realme 6i, Realme X3, Realme X3 SuperZoom
Aditya Shenoy Email Aditya Aditya Shenoy reviews smartphones, wearables, headphones and speakers for Gadgets 360, out of Mumbai. Aditya is a reviewer for Gadgets 360 and has written extensively about smartphones, software updates, and upcoming devices. Aditya is available on Twitter at @adishenoy, and you can mail him at adityashenoy@ndtv.com, so please send in your leads and tips. More
Mi Beard Trimmer 1C With 60-Minute Battery Life Launched in India, Priced at Rs. 999
Nintendo Profit Jumps 428 Percent Thanks to Animal Crossing: New Horizons