Realme 6 Pro or Realme 6 can be reserved by paying Rs. 3000 before March 10 and paying the remaining amount between the first sale date and March 15. 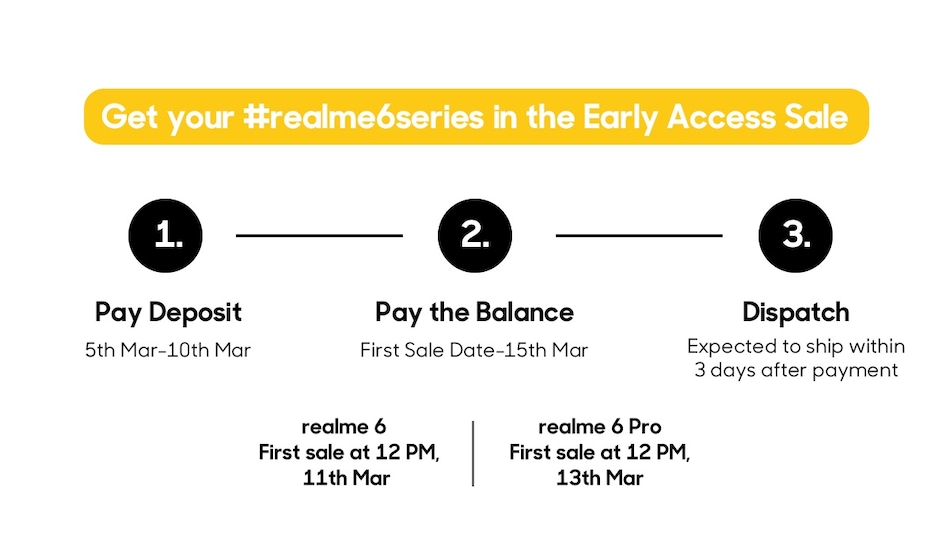 Realme announced its Realme 6 and Realme 6 Pro smartphones yesterday, March 5. The Realme 6 will first go on sale on March 11 and the Realme 6 Pro will be available for the first time on March 13. Anticipating the amount of people who would want to but the two phones, CEO of Realme India Madhav Sheth took to Twitter to announce that there will be an early access sale for the Realme 6 series. According to the tweet, people interested in buying either of the phones can make a fixed deposit before March 10 to reserve the phone.

Guys, another chance to get #realme6series before anyone else!
Early Access Sale starts today on https://t.co/EgEe8viGtE.
- Pay ₹3,000 deposit before Mar. 10th ensuring 100% to buy
- Pay balance due between 1st sale - Mar. 15th
Also get exciting offers on #realmeAccessories. pic.twitter.com/pruklnHV8r

The tweet by Madhav Sheth also states there will be some offers on the Realme accessories as well. The early access sale is open since yesterday on the company website.