Realme 5s Specifications Tipped on Geekbench Ahead of Tomorrow's Launch

Realme 5s sports a Snapdragon 665 SoC, something the company had detailed earlier.

Realme 5s is set to launch in India tomorrow. Flipkart, which is the exclusive partner for this smartphone had already teased the upcoming smartphone. In its last teaser, Flipkart revealed the design of the smartphone along with a few other key specifications such as the 48-megapixel primary camera. The Realme 5s has now been spotted on Geekbench confirming the hardware powering the smartphone. With the smartphone scheduled to launch this week, there is very little that is unknown about the Realme 5s.

The upcoming smartphone was spotted on Geekbench bearing model number realme RMX1925. It also corroborates that the Realme 5s packs in a Qualcomm Snapdragon 665 SoC just as the Realme 5. There is 4GB of RAM but the storage capacity is currently unknown. The Realme 5 comes in three variants out of which two variants sport 4GB of RAM with 64GB of storage and 128GB of storage respectively. 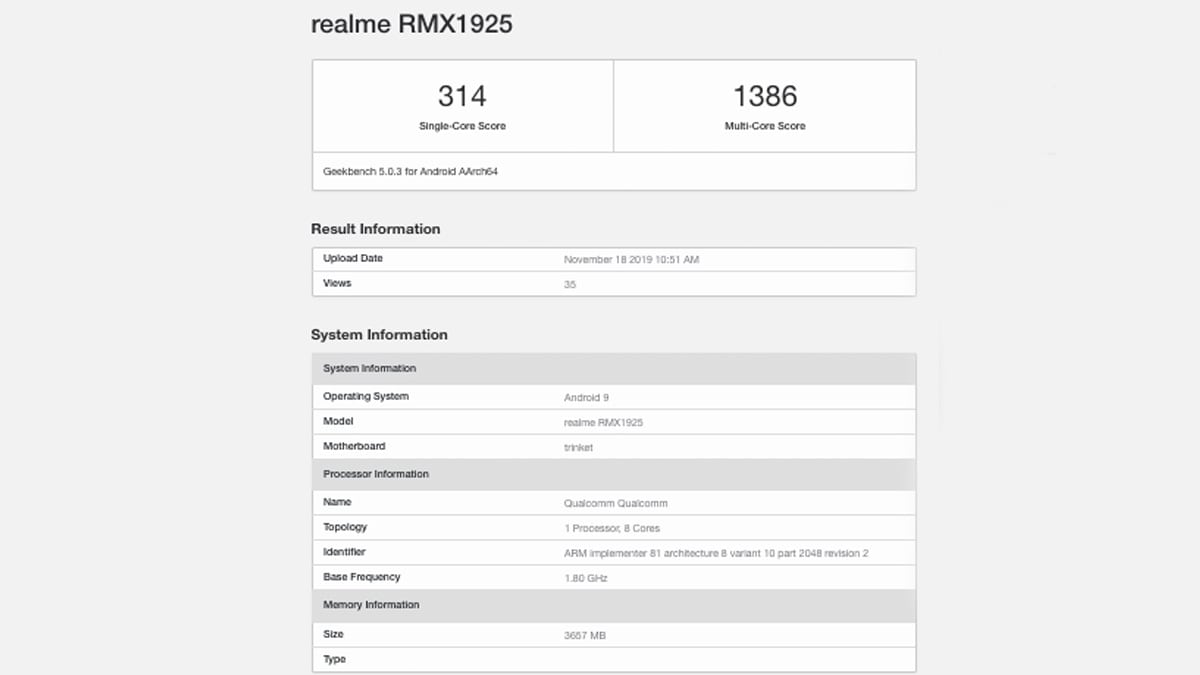 The smartphone managed to score 314 points and 1,386 points in Geekbench's single-core and multi-core tests respectively. Geekbench also reveals that the smartphone will run Android 9 Pie. Previous teasers have already revealed that the Realme 5s sports a 6.51-inch HD+ display. The teaser also showcased the 5,000mAh battery the smartphone packed. The Geekbench listing was first spotted by DroidShout.

Realme 5s also received certification in India and Thailand which suggested a quad-camera setup consisting of a 48-megapixel primary sensor, a secondary wide-angle camera, depth sensor and a macro camera.

Further reading: Realme, Realme 5s
Aditya Shenoy Email Aditya Aditya Shenoy writes reviews smartphones, wearables, headphones and speakers for Gadgets 360, out of Mumbai. Aditya is a reviewer for Gadgets 360 and has written extensively about smartphones, software updates, and upcoming devices. Aditya is available on Twitter at @adishenoy, and you can mail him at adityashenoy@ndtv.com, so please send in your leads and tips. More
Apple Set to Host Special Event on December 2 to 'Honour' Favourite Apps, Games
Huawei Nova 6 5G to Launch on December 5, Teasers Suggests Dual Hole-Punch Display, Night Scene 2.0, More Features