Realme 5G Smartphone Spotted on Multiple Certification Websites, Could Be the Realme X3 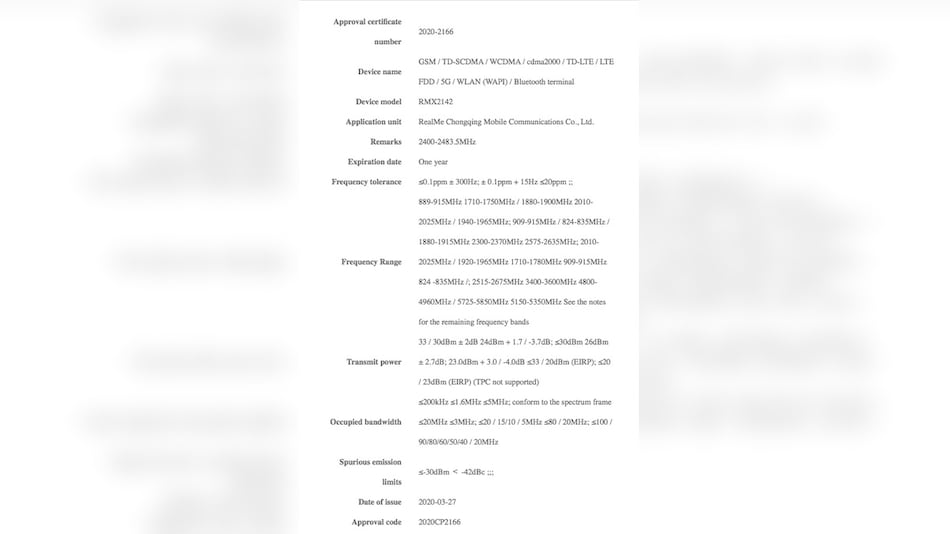 Alleged Realme X3 may have support for 5G

Realme's rapidly expanding catalogue of smartphones seems to be getting another addition. A new Realme smartphone was spotted on multiple certification websites with model number RMX2142. These listings only state that the phone supports 5G and that it will have fast charging support. But, the model number itself seems to suggest that the phone may be the Realme X3, given its similarity to the recently spotted Realme X3 SuperZoom. However, these are just speculations and there has been no official word from Realme.

According to a report by MySmartPrice, the Realme smartphone with model number RMX2142 was spotted on Chinese certification website 3C, as well as on MIIT certification website. Both of these listings state the phone with model number RMX2142 supports 5G. The 3C listing also shows the charging specifications expected to come with the phone and it looks like there will be support for 30W fast charging. We were able to verify the 3C listing but not the MIIT certification.

Talking about the Realme X3 SuperZoom, the phone was spotted in a couple of Geekbench listings as well, along with the NBTC listing. Both of them state the phone will have an octa-core processor and will come with 12GB of RAM. The phone was also spotted on Indian certification website BIS suggesting its launch in the Indian market. Additionally, the listings only hinted at an LTE option and no 5G, unlike the RMX2142 which will have support for 5G.