Realme 5 series is launching in India on August 20

Realme 5 has apparently surfaced on Geekbench just days ahead of its formal launch. The smartphone appears to have the octa-core Qualcomm Snapdragon 665 SoC, which we already saw on models such as Xiaomi's Mi CC9e and Mi A3. The model number featured on the Geekbench site is the Realme RMX1911. Notably, this same model number has been listed on Thailand's NBTC certification site along with the Realme 5 moniker. The Realme 5 is set to launch in India on August 20 - alongside the Realme 5 Pro.

As per the Geekbench listing, which was uploaded on Tuesday, August 13, the Realme phone carrying model RMX1911 has 4GB of RAM. The motherboard section on the listing shows "trinket", which is associated with the Snapdragon 665 SoC -- especially if we look at the earlier Geekbench entries of the Mi CC9e and Mi A3.

The Realme phone has received a single-core score of 1,525, while its multi-core score comes at 5,498, as per the Geekbench listing. The listing was first spotted by Nashville Chatter. 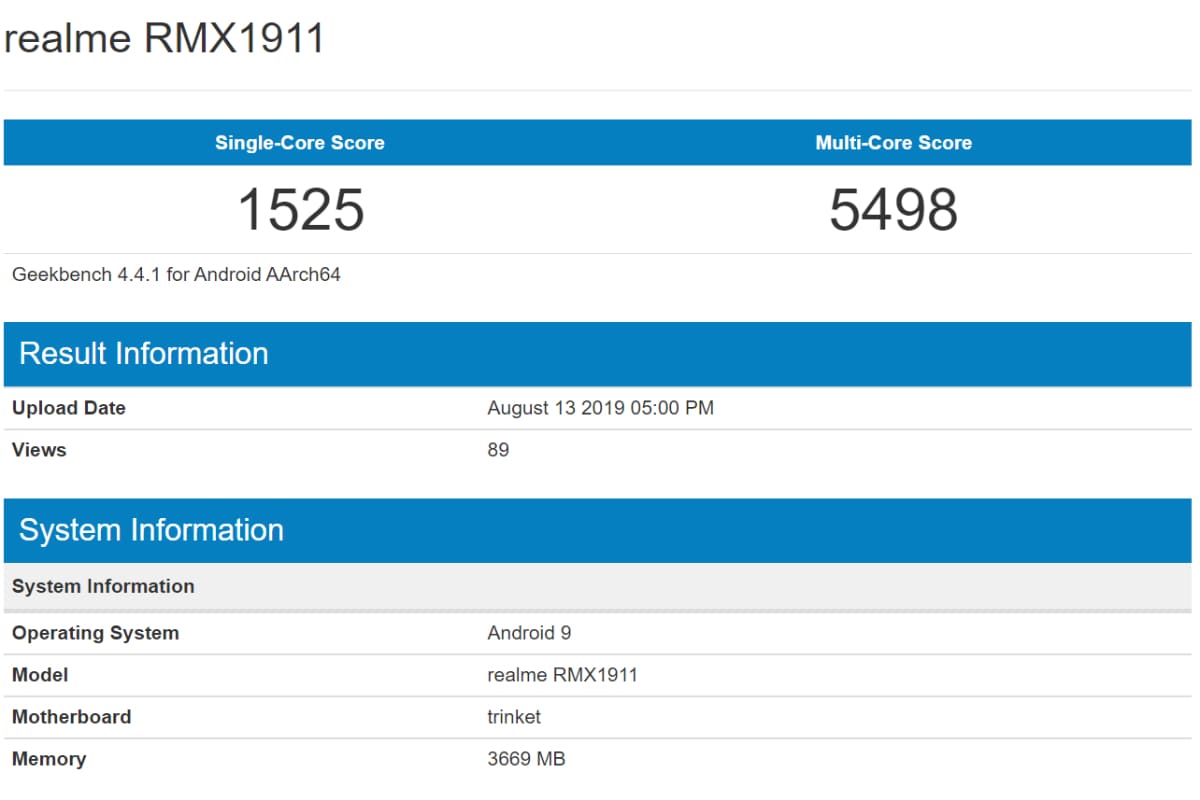 It is worth pointing out that the Geekbench site doesn't confirm any relationship between the model number RMX1911 and the Realme 5. Nevertheless, the listing on the NBTC site suggests that both are associated with one device.

The Realme 5, along with the Realme 5 Pro, is set to debut in India on August 20. In some of the previous posts through its social media channels, Realme confirmed that the Realme 5 Pro will be the company's first phone to sport a quad rear camera setup and include a 48-megapixel sensor. The Realme 5 specifications, however, are yet to be revealed.

Realme 5 Spotted on Geekbench With Snapdragon 665 SoC Ahead of Official Launch
Comment
Read in: हिंदी