Realme 5, Realme 5 Pro Price in India, Specifications, and More: Everything We Know So Far

Realme 5 Pro and Realme 5 smartphones will be launched in India today sporting wide-angle and a dedicated macro lens.

Realme 5, Realme 5 Pro are set to launch in India today. The Oppo spin-off brand is really kicking it in 2019. From being the first company to actually showcase a phone with a 64-megapixel rear camera to confirming a quad camera phone for less than Rs. 10,000, Realme is intent on solidifying its position in the budget segment. The company's upcoming phones - Realme 5 and Realme 5 Pro – have generated a lot of buzz and will be unveiled at an event in India today. But before the Realme 5 series makes its debut, here's a rundown of what we know so far about the specifications, features, and pricing of the two upcoming phones that aim to rattle Xiaomi's dominance in the Indian smartphone market.

The Realme 5 and Realme 5 Pro have officially been confirmed to launch at an event on August 20, where the company is also expected to debut the upgraded version of the Realme Buds, tentatively called the Realme Buds 2. As for the price, Realme CEO Madhav Sheth recently revealed that the Realme 5 will be priced below Rs. 10,000 in India, making it the first phone in that price segment to pack quad rear cameras.

As for the Realme 5 Pro, there is no word on its expected asking price, neither from an official source, nor from leaks. Coming to market availability, Flipkart will be among the online platforms where the Realme 5 series phones will be up for grabs, alongside the official Realme website and authorised retail outlets. Separately, the Realme 3i will go on sale in India today.

Starting with the Realme 5 Pro, the phone will sport a 48-megapixel Sony IMX586 primary sensor, as is clearly evident by the microsite on Flipkart. The phone's imaging hardware will include a 119-degree wide angle lens, a 4cm focus Super Macro Lens, and a depth sensor for portrait images. Coming to the Realme 5, it will reportedly feature a 16-megapixel primary sensor, but the rest of three rear cameras will reportedly be identical to its pro sibling. 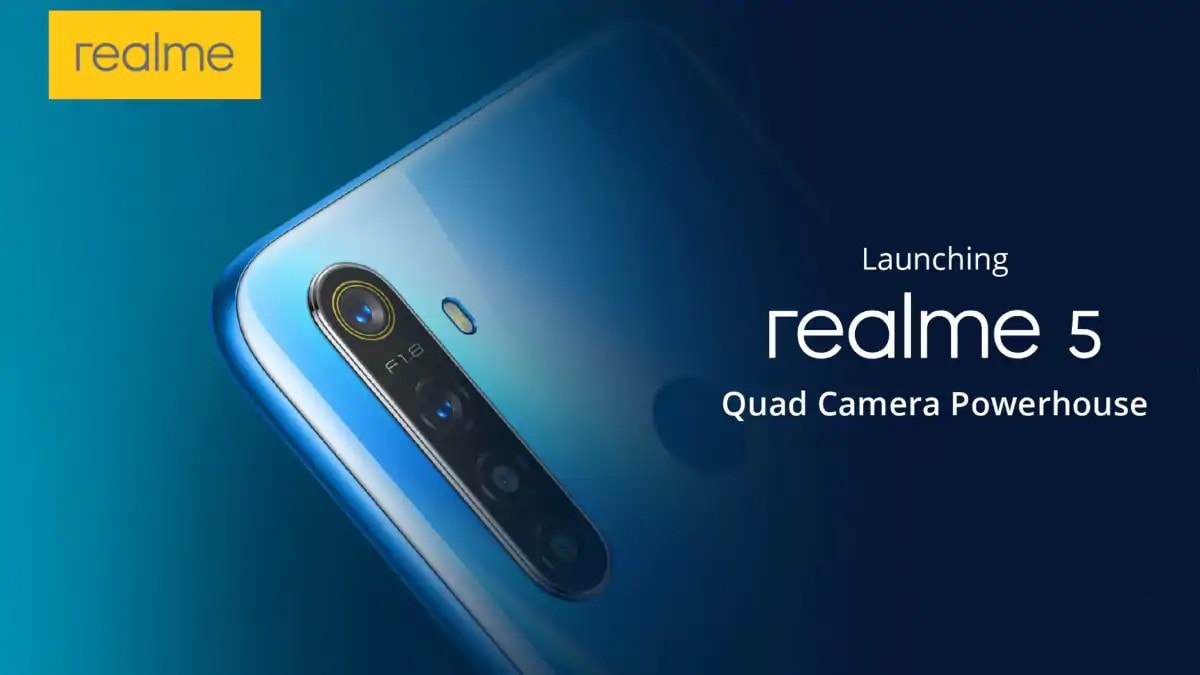 As far as the design goes, the teaser images indicate that the four camera sensors will be housed in a vertically oriented module at the top left corner of the rear panel. The marketing image also clearly shows a rear-mounted fingerprint sensor, which rules out an in-display fingerprint sensor on either of the two phones.

Talking about the internal hardware, the Realme 5 Pro was recently spotted on Geekbench with the octa-core Qualcomm Snapdragon 710 SoC paired with 8GB of RAM. However, some rumours suggest that the phone might be powered by the Snapdragon 712 SoC. The company might also launch lower-end variants of the phone packing 6GB of RAM and a variable amount of internal storage.

As for the Realme 5, a recent Geekbench sighting indicates that it will draw power from the Snapdragon 665 SoC ticking alongside 4GB of RAM. If that turns out to be true, the Realme 5 will go against the Xiaomi Mi A3, which is powered by the same octa-core Qualcomm processor. It is currently not known how much internal storage the two Realme 5-series phones will offer and whether it would be expandable or not.

Further reading: Realme 5 Pro specifications, Realme 5 Pro, Realme, Realme 5, Realme 5 Specifications
Tasneem Akolawala Email Tasneem Tasneem Akolawala is a Senior Reporter for Gadgets 360. Her reporting expertise encompasses smartphones, wearables, apps, social media, and the overall tech industry. She reports out of Mumbai, and also writes about the ups and downs in the Indian telecom sector. Tasneem can be reached on Twitter at @MuteRiot, and leads, tips, and releases can be sent to tasneema@ndtv.com. More
Redmi TV Set to Launch on August 29 Alongside Redmi Note 8 Smartphone
The Lion King Now One of the 10 Highest-Grossing Films of All Time, With $1.435 Billion at Worldwide Box Office

Realme 5, Realme 5 Pro Price in India, Specifications, and More: Everything We Know So Far
Comment
Read in: தமிழ்