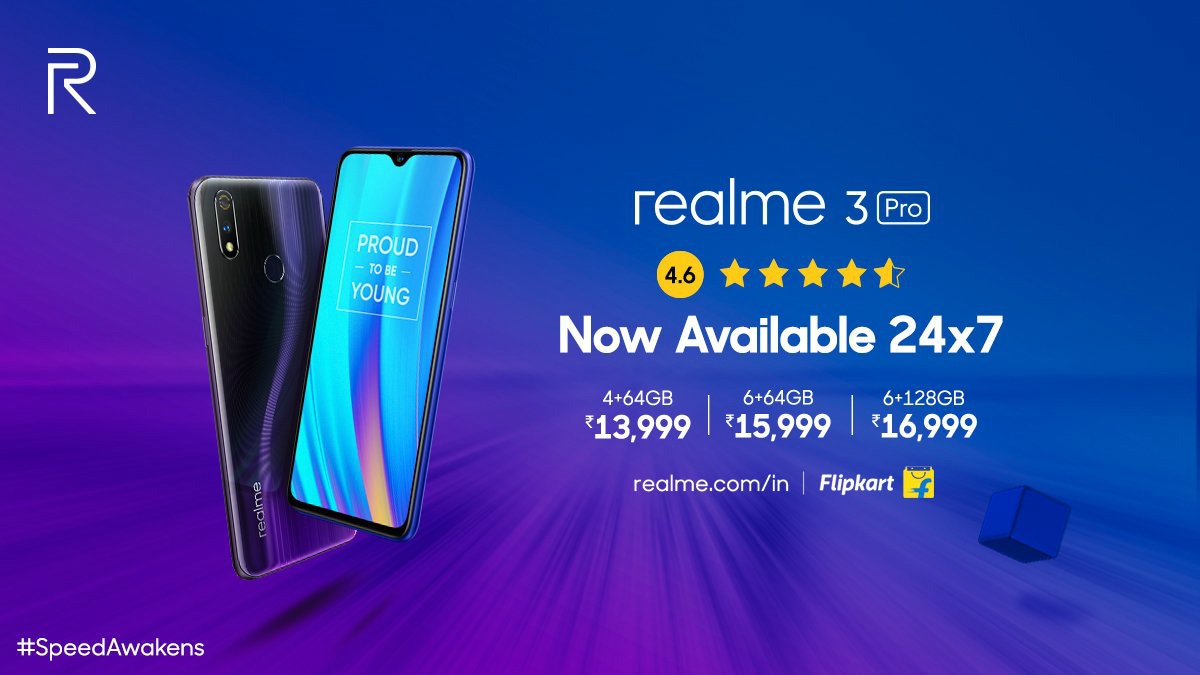 Realme 3 Pro was launched in India in April this year

Realme 3 Pro was launched in India less than two months ago, the company initially offered the smartphone using flash sales. Now, the Chinese smartphone maker has announced that the phone is available in an open sale manner moving forward. All the consumers, who are interested in the Realme 3 Pro, can now just head over to Flipkart or Realme online store and purchase the phone any time they want. The Realme 3 Pro comes equipped with a 6.3-inch full-HD+ display and is powered by the Snapdragon 710 SoC, while ColorOS 6.0 based on Android Pie handles things on the software side.

Realme Mobiles took to Twitter to make the announcement. The tweet says that the Realme 3 Pro is available in an open sale manner on both – Flipkart and Realme online store.

In terms of the sale offers, Flipkart has listed an exchange offer and 10 percent discount for Axis Bank Buzz credit cards. Realme.com has also listed a Mobikwik offer that gives 10 percent super cash cashback maximum up to Rs. 1,000.

Realme 3 Pro price in India starts at Rs. 13,999 for the base variant with 4GB of RAM and 64GB of onboard storage. The phone's 6GB + 64GB and 6GB + 128GB retail at Rs. 15,999 and Rs. 16,999, respectively. The phone comes in Carbon Grey, Nitro Blue, and Lightning Purple colour options with a gradient finish. The phone was recently also made available via 8,000 retail outlets across the country.

Under the hood, the Realme 3 Pro draws power from the octa-core Qualcomm Snapdragon 710 SoC clocked at 2.2GHz, ticking alongside Adreno 616 GPU and up to 6GB of RAM.

For authentication, the Realme 3 Pro packs a rear-mounted fingerprint sensor. Additionally, the phones features up to 128GB of onboard storage, which can further be expanded via a microSD card (up to 256GB).