Realme has started rolling out new ColorOS updates for Realme 2 Pro, Realme 2, and Realme C1 smartphones. The software updates are now live over-the-air (OTA) and will reach all Realme 2 Pro, Realme 2, and Realme C1 devices over the next few days. According to the company, the new ColorOS update primarily brings the March Android security patch to the smartphones. All three software updates are live in India and Indonesia markets. Realme has also published the update files on the company website for manual installation.

Realme announced the arrival of the new software updates on its website. According to the company, the Realme 2 Pro update carries the software build number RMX1801EX_11.A.17_0170_201903151409 and just includes the March Android security patch for the smartphone. The company also hinted that the ColorOS 6 update will soon be bringing a number of new features to the phone. One of our team members' units has received the update, and you can see screenshots below. 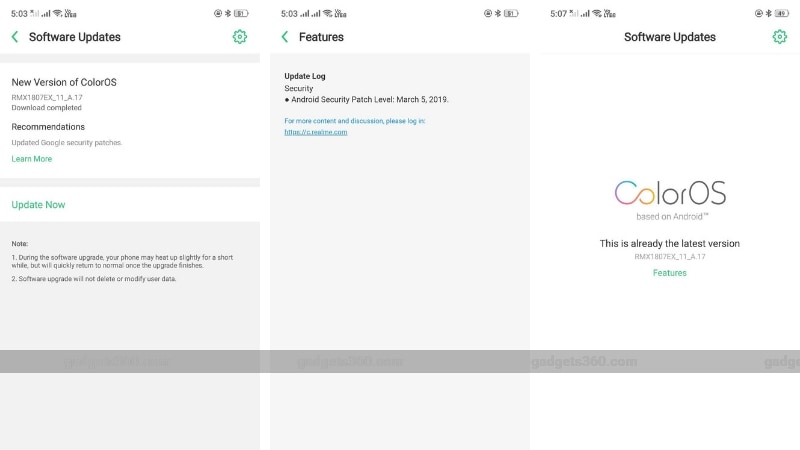 Among other Realme phones, Realme U1 has already received the March security update. The Realme 1 and Realme 3 are the only phones left to get this month's security update.

To recall, Realme, a spin-off of Oppo, had launched the Realme 2 Pro and Realme C1 smartphones in India in September last year, whereas the Realme 2 arrived in the country in August 2018.