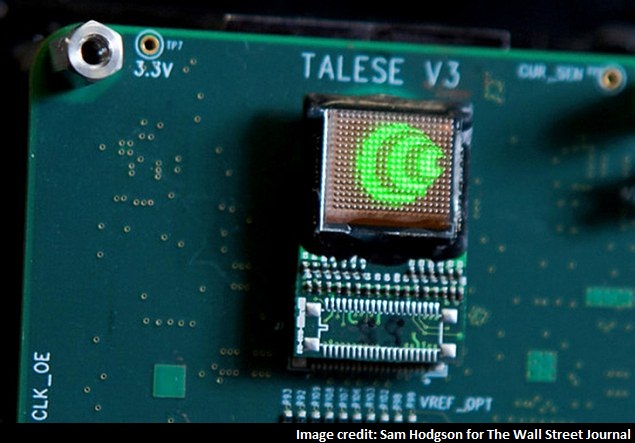 A California-based startup, Ostendo Technologies, has created a miniature projector that is small enough to fit in a smartphone and is capable of projecting 2D and glasses-free 3D holographic video on a surface with a 48-inch diagonal.

Reported by WSJ, the startup has succeeded in developing miniature projectors that can emit crisp videos and glasses-free 3D images for smartphones and giant screens. Called the Ostendo Quantum Photonic Imager, it combines an image processor with LEDs alongside embedded rendering software.

Ostendo says that it has plans to work with handset manufacturers to incorporate its 2D projector chip, which can be out in consumers hands before the summer of 2015. The size of it would be roughly the size of an iPhone camera at less than 0.5 cubic centimetres.

The company also expects to begin manufacturing the 3D version of the chip that will feature holographic capabilities in the second half of 2015; with the cost estimated at about $30 a chip.

Ostendo's Chief Executive and Founder, Dr. Hussein S. El-Ghoroury, believes that the company still needs to improve the 3D product and is aiming to make the pixels even smaller to achieve the high resolution.

According to MIT's professor Ramesh Raskar, the key to Ostendo's 3D-capable holographic projection chip is its high pixel density, equal to about 5,000 dots per inch (dpi).

The company has been developing the miniature projectors for the past nine years, and WSJ reports it has raised roughly $130 million in government (via Darpa) and venture capital funding. Powered from a computer chip these miniature projectors can control the colour, brightness and angle of each beam of light across one million pixels.

The Wall Street Journal team also got a chance to see the working prototype, which featured a "set of six chips laid together that beamed a 3-D image of green dice spinning in the air. The image and motion appeared consistent, irrespective of the position of the viewer," the report added.
Comments