Ahead of Qualcomm's anticipated unveiling of the Snapdragon 820 SoC at an event in Los Angeles on August 11, the specifications of the chipmaker's next flagship mobile processor appear to have leaked in their entirety. If the leaked slides are to be believed, the Snapdragon 820 chipset is 35 percent faster than the Snapdragon 810 while also being 30 percent more energy efficient.

Analyst Pan Jiutang has posted the slides on Chinese social network Weibo detailing the features of the upcoming processor. The Snapdragon 820 chipset is said to use a 14nm FinFET manufacturing process (compared to the 20nm that the current generation 810 utilises). Qualcomm is also ditching the ARM's big.LITTLE processors in favour of its self-designed Kyro processor, which is being referred to as Hydra.

Furthermore, the company is also cutting down the number of cores from eight (as seen in Snapdragon 810) to four. The slides claim that this whole new arrangement sees 40 percent improvement on the graphics department and 30 percent on the battery side. 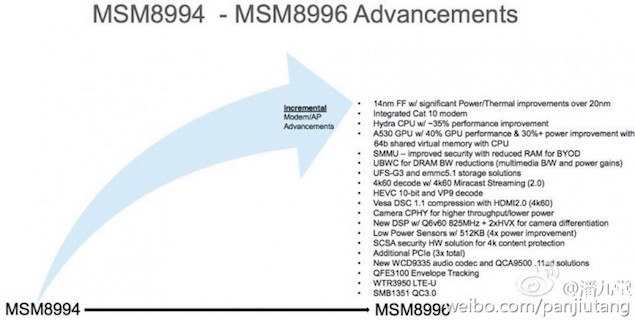 On the memory front, the Snapdragon 820 will support dual-channel LPDDR4 RAM with speeds up to 1688MHz. The new processor will also allow smartphone companies to make better use of camera, with support for up to 28-megapixel sensor with programmable preprocessing and post-processing digital signal processor (DSP). On the multimedia side, the Snapdragon 820 will allow native support for 4K videos at 60 frames per second.

The company's current flagship Snapdragon 810 chipset largely failed to deliver the success Qualcomm had expected of it. Not only was the chipset not the biggest powerhouse in town - reports suggest that Samsung's homegrown Exynos chipset in the Galaxy S6 and S6 Edge beating the Snapdragon 810 in several benchmarking tests - it was also widely reported and defamed for overheating issues.

The company is expected to officially detail more information about the Snapdragon 820 SoC at an event next week. The processor won't start appearing on phones and tablets until 2016, however.