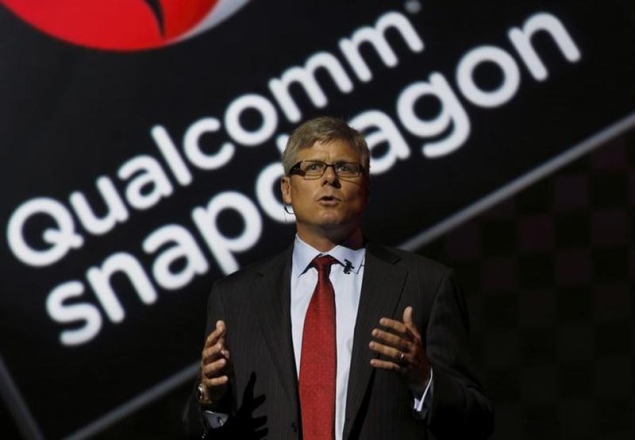 Qualcomm Inc, the world's biggest maker of cellphone chips, unexpectedly named Chief Operating Officer Steve Mollenkopf as chief executive on Friday, heading off the possibility he might be poached to run Microsoft Corp.

Mollenkopf had been in line to eventually succeed CEO Paul Jacobs, the 51-year-old son of a Qualcomm co-founder, but that plan was sped up in order to keep the senior executive from leaving, Jacobs told Reuters in an interview.

"Our executives are very talented and very sought after," Jacobs said, when asked by Reuters whether the promotion was related to an offer from Microsoft.

"The timing is a little faster than we originally planned but the key thing is to make sure we kept management continuity," Jacobs said.

Jacobs and Mollenkopf declined to specifically discuss Microsoft or whether Mollenkopf had a job offer from the world's largest software company, which is seeking a candidate to replace retiring CEO Steve Ballmer.

On Thursday, Bloomberg News reported that Microsoft has been considering Mollenkopf as a candidate for CEO.

"He would have been an awesome (Microsoft) CEO," said FBR analyst Chris Rolland. "But Qualcomm didn't want to lose him, and it makes sense to me."

"If I were the son of a founder of a $130 billion company, I would want to make sure I have the top guy behind me - and Steve is definitely that guy," Rolland said.

Removing Mollenkopf from the shortlist of CEO candidates at Microsoft could complicate matters for its board. The company was down to a "handful" of candidates with no clear leader, sources familiar with the matter told Reuters this week.

Mollenkopf, 44, will take the reins in March, as Qualcomm faces a shift in smartphone growth away from the United States toward China, where it faces an antitrust investigation and where consumers often spend less on their phones.

Qualcomm shares were flat at $72.73 on Nasdaq, suggesting investors saw little impact from the change.

Jacobs, who replaced his father Irwin as Qualcomm CEO in 2005, will serve as executive chairman and focus on developing new technology and long-term opportunities, the company said.

"Paul is a visionary guy and Mollenkopf really knows how to run things. So I think this division of labor makes a ton of sense, although it's a little earlier than I would have expected," said Bernstein analyst Stacy Rasgon.

Under Jacobs, Qualcomm, founded in 1985, has become the top chip supplier for smartphones and its stock value has surpassed that of Intel Corp. Intel is still the world's largest chipmaker by revenue but is struggling to gain a foothold in mobile.

Investors have been urging Qualcomm to give back more of its profits, and last month Jacobs promised to return three-quarters of its free cashflow to shareholders.

Mollenkopf, an engineer, led Qualcomm's $3.1 billion acquisition of radio frequency chipmaker Atheros Communications Inc in 2011, its biggest acquisition. He will replace Jacobs on March 4, after the annual shareholder meeting.

Under Jacobs' leadership, the company's share price has more than doubled, giving Qualcomm a market capitalization of over $120 billion, while earnings have tripled. The Philadelphia SE Semiconductor Index has risen just over 20 percent in the same period.

While most of Qualcomm's revenue comes from chips that allow phones to communicate with carrier networks, most of its profit comes from licensing patents for its CDMA cellphone technology - a component in new fourth-generation mobile phones.

Mollenkopf focuses mostly on the semiconductor side of Qualcomm's business.

"If anything, Mollenkopf in the lead means (an) intense commitment to the semi business," said Argus Research analyst Jim Kelleher.

China trouble
The antitrust investigation in China will be a key concern for the new CEO. China's top economic planning agency has substantial evidence against Qualcomm, state media quoted a senior official as saying on Thursday.

Half of Qualcomm's revenue comes from China, including Foxconn Technology Group, which assembles most of the world's top-selling electronic gadgets including Apple Inc's iPhone.

Most of the chips the company sells in China are used in devices that are exported. But domestic Chinese sales make up around a fifth of Qualcomm revenue and it is positioned to reap the vast majority of licensing fees for phone chips in the world's biggest smartphone market.

Qualcomm denies any wrongdoing and says it is cooperating with the probe, which analysts say is likely tied to royalty negotiations ahead of the impending $16 billion rollout of commercial fourth-generation services by China's big telecoms carriers.

Samsung, uneasy in the lead
Google removes privacy feature from Android, says inclusion was an accident