Qualcomm announces it is facing an antitrust probe in China 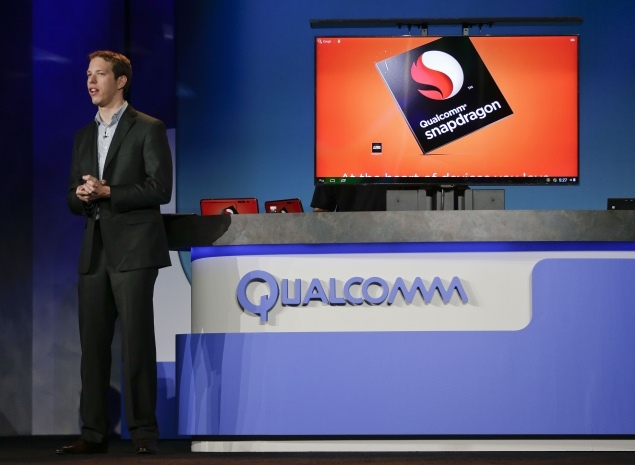 Chinese regulators have launched an anti-trust investigation into Qualcomm, the U.S. mobile chipmaker said on Monday, and some experts suggested China's government may be seeking leverage in royalty negotiations.

China's largest cellphone carrier is preparing a major move to 4G wireless technology next year, and Qualcomm has been hoping that will provide it with a major new source of royalty revenue. The company said it was not aware of any antitrust violations but would cooperate with the probe by China's National Development and Reform Commission (NDRC).

The NDRC did not say why the company was being investigated, according to Qualcomm. China's state media on Sunday quoted an NDRC official saying regulators would focus antitrust investigations on six industries, ranging from technology to medicine.

Qualcomm, the world's biggest maker of cellphone chips, sees China as a key market as growth in smartphones shifts away from the United States to developing countries. China Mobile has been preparing to upgrade to high-speed networks using technology developed by Qualcomm.

The U.S. company reported $12.3 billion in revenue from China in the 12 months through September, equal to 49 percent of its total revenue.

But many of the smartphones made in China are exported, so the Chinese market actually accounts for about a fifth of Qualcomm's chip shipments and licensing revenue, according to Raymond James analyst Tavis McCourt.

Some analysts speculate China's antitrust investigation may be an attempt to gain leverage in royalty negotiations with Qualcomm ahead of the expected rollout of new 4G wireless infrastructure in 2014. Analysts also theorized that Beijing may be moving to support local suppliers trying to compete with Qualcomm, the global leader in 4G technology, also known as Long-Term Evolution (LTE).

In February, the NDRC attracted attention when it fined six Korean and Taiwanese makers of liquid crystal displays about $57 million for price fixing.

With Broadcom Corp, Intel Corp and other chipmakers missing targets for the their own LTE components, Qualcomm is the main player in LTE, which China Mobile plans to roll out next year to allow for faster data transfer rates over cellphones.

"We suspect this investigation is related to the forthcoming launch of TD-LTE by China Mobile in early 2014 and the negotiations on chip pricing and license pricing between Qualcomm and Chinese-based handset (manufacturers) that are likely occurring right now," McCourt wrote in an note to clients.

A Qualcomm spokesman declined to comment but at the company's annual investor day last week, CEO Paul Jacobs and other senior executives focused on China and the upcoming LTE rollout there as big opportunities to sell more smartphone chips and collect new royalties as LTE is implemented.

With growth in the smartphone industry shifting away from wealthy markets toward China, Qualcomm and other U.S. chipmakers have increased their focus on supplying components for low-cost phones. And they are competing more with local chipmakers.

China Mobile, the world's biggest mobile carrier with 800 million subscribers, is investing billions of dollars to upgrade its infrastructure to LTE so clients can enjoy speedier Internet and data access.

"You're getting ready to have this battle over 4G royalties and now you have this antitrust investigation," said Williams Financial analyst Cody Acree. "It may well be that this reform commission is beginning to throw up reasons and excuses for why China doesn't pay royalties on 4G."

The NDRC is China's top economic planning body and regulates prices. It has launched nearly 20 pricing-related probes of domestic and foreign firms in the last three years, according to official media reports and research published by law firms.

In August, sources told Reuters that a senior Chinese official had put pressure on about 30 foreign firms, including General Electric Co and Siemens, to admit to antitrust violations and warned them against using external lawyers to fight accusations from regulators.

Shares of San Diego-based Qualcomm closed 0.64 percent lower at $72.49 on the Nasdaq.

Infrastructure spending on 4G will nearly triple to $24.3 billion in 2013 from $8.7 billion in 2012, according to research firm IHS iSuppli, fueled by network expansions in major markets such as China, Japan and Germany.