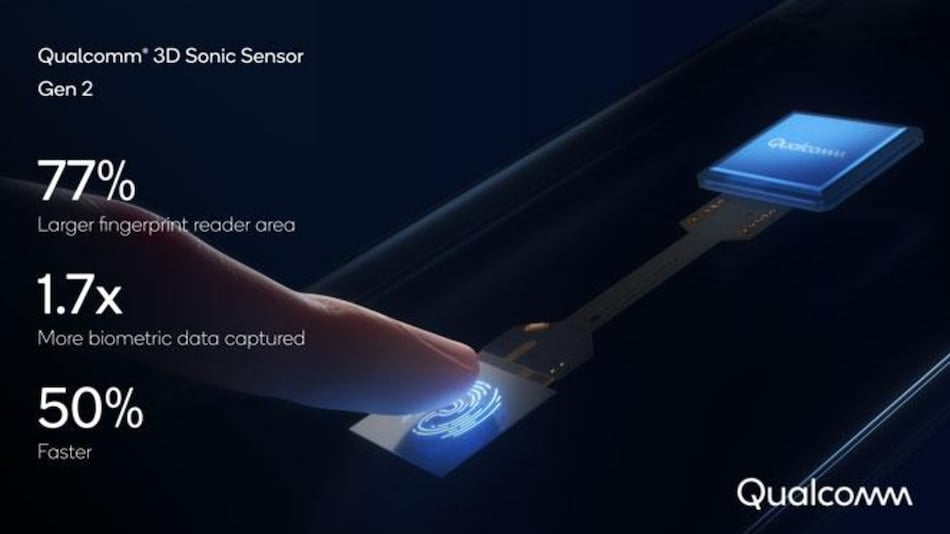 Qualcomm 3D Sonic Sensor Gen 2 has been launched as a new ultrasonic fingerprint scanner for smartphones. The new sensor is claimed to deliver up to 50 percent faster screen-unlocking experience and with 77 percent larger area when compared to the previous generation. The sensor is also capable of recognising fingerprint patterns of users even when the fingers are wet. The first generation of Qualcomm's 3D Sonic Sensor debuted on existing Samsung Galaxy flagship phones, including the Galaxy S20 and Galaxy Note 20. Thus, it makes sense for the San Diego-based company to introduce the 3D Sonic Sensor Gen 2 on the next-generation Galaxy S series that is expected to be called the Galaxy S21.

The larger surface area of the new fingerprint sensor helps capture 1.7 times more biometric data and at a faster pace. Qualcomm claims that the sensor will be able to process the data 50 percent faster than the previous generation. You are likely to notice the difference when unlocking a phone equipped with the new sensor.

Qualcomm also mentioned in the official announcement that its 3D Sonic Sensor is just 0.2mm in thickness. This makes it capable of integrating within edge-to-edge flexible OLED displays.

On the availability front, Qualcomm said the new 3D Sonic Sensor will be available in mobile devices in early 2021. The company didn't provide a concrete launch date. But nonetheless, it did mention that its first-generation 3D Sonic Sensors were featured on flagship smartphones including the Samsung Galaxy S10, Galaxy S20, Galaxy Note 10, and the Galaxy Note 20 series. This suggests that the new sensor could debut on the Galaxy S21 series that is expected to debut on Thursday, January 14.

Qualcomm has notably been developing ultrasonic fingerprint sensors for nearly six years now. The sensors reach a large number of customers through Samsung flagships. Some flaws in the technology also surfaced initially, and most of them were fixed through software updates.