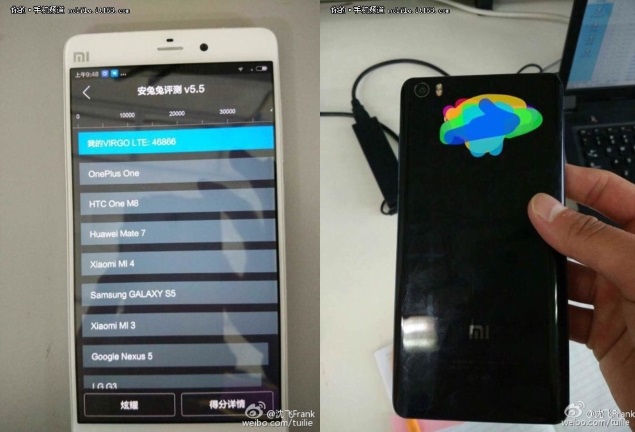 Xiaomi is widely expected to reveal its next flagship product at the upcoming Thursday event. Prior leaks have indicated that the company might launch the successor to its Mi 4 flagship - the Mi 5.

Now, a Chinese publication (via PhoneArena), just couple of days ahead of Xiaomi's Thursday event, has posted a bunch of images purportedly showing the alleged Mi 5 smartphone. In the leaked images, the Mi 5 is seen running a benchmark app, thought to be AnTuTu, and a showing score of the smartphone.

The Mi 5 is seen in leaked images scoring an impressive 46,866 score and is listed in the app as Virgo LTE device. Another image shows a benchmark chart where the yet-to-be-announced Mi 5 scores more than some of the other Android heavyweights such as OnePlus One, HTC One (M8), Xiaomi's own Mi 4 and Mi 3, Samsung Galaxy S5, Google Nexus 5, and the LG G3.

In one of the images, the benchmark app is showing quad-core Qualcomm Snapdragon 801 chipset powering the handset.

The Mi 5 can be seen sporting a sleek design in the leaked images and also appears to come with a plastic build, unlike the Mi 4. One of the images from rear panel show the primary camera accompanied by dual-LED flash. The Mi logo can be seen on both the front and rear of the smartphone.

Xiaomi has been lately stressing on the fact that its next flagship product will be very sleek in teaser posts shared by the company on social platforms. However, to our surprise none of the new surfaced images show any signs of sleek profile on the handset.

Xiaomi on Monday shared a short 15-second video on Facebook that teased features of the new product. The short clip included incomplete sentences such as "As _ as paper", "The _ the better," and "As _ as a bell." We expect that the missing words were thin, bigger, and curved in the sentences. To that end, the leaked images once again show nothing curved about the handset.

Another handset that has been rumoured to launch alongside the Mi 5 is the Redmi Note 2, which was listed recently on an online retailer.