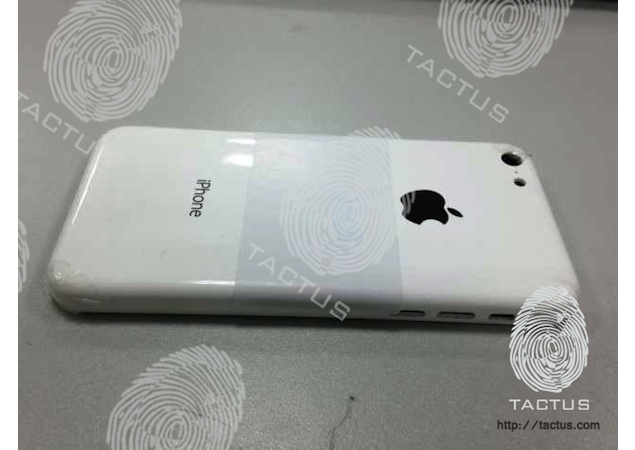 Case manufacturer Tactus has shared purported pictures of the rear shell of Apple's much rumored lower-cost iPhone. The rear shell is White in colour and appears to have been made from plastic polycarbonate. This could also open the possibility of the phone coming in multiple colours, as reported earlier. The case maker also informs that the device will be available in Black, White, Blue, Red and Yellow colours, citing the ' factory producing this secretive project' as a source.

Posting an image of the shell on its blog, Tactus informs that the actual phone might be around 9mm thick, 120mm in height and around 62-65mm in width, making it both taller and wider than the iPhone 4 and 4S.

It's difficult to verify the credibility of the image of the case. Accessory makers have produced mock-up cases in the past that have at times turned out to be accurate.

The case maker goes on to report that the budget iPhone will be powered by an A5 processor similar to the iPad Mini with a 32nm diecast and that it will have a 3.5-inch retina screen, like the iPhone 4S. The phone is expected to sport a 5-megapixel rear camera.

It even mentions that the budget iPhone would go on sale October 15th for $300. However, we'd take it with a grain of salt as an accessory maker or anyone part of Apple's supply chain is unlikely to have accurate information of Apple's exact device plans.

Just a few days back KGI Securities analyst Ming-Chi Kuo came out with a new research report that said that the Phone 5S, low-cost iPhone and iPad mini 2 will begin shipments later than its previous expectation. He had also confirmed a plastic shell for the budget iPhone and had said that Apple was finding it difficult to keep the plastic shell of the low-cost iPhone as thin as it would like.
Comments