The new images posted on ePrice feature the long-rumoured HTC One Max. The images reveal that the alleged phablet from the Taiwanese device maker will also come in a dual-SIM variant and will feature a fingerprint scanner.

The site claims that it received the upcoming HTC One Max headed for carriers in China with support for GSM+GSM/ WCDMA, dual-SIM with dual standby. The leaked images have also revealed that the rumoured HTC phablet will feature a removable rear panel with support for expandable memory, although the battery will not be user replaceable.

As we mentioned, the leaked images also reveal that the alleged HTC One Max phone will be equipped with a fingerprint scanner. In one of the leaked images, the pull-down menu shortcut control houses an icon for a fingerprint scanner alongside the usual toggles for Bluetooth, Wi-Fi, Brightness, profile and Battery. However, no additional details about the feature were available. 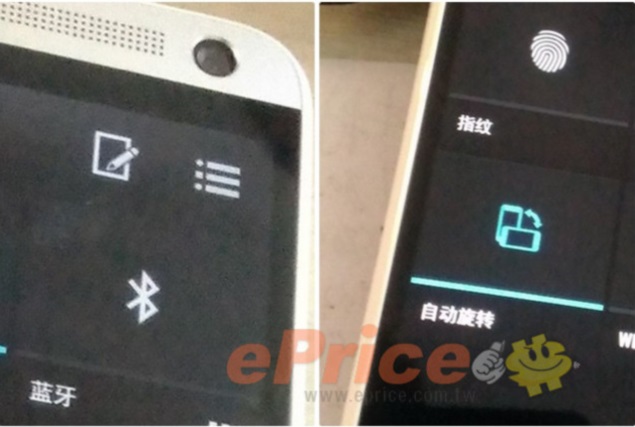 In line with previous rumours, if the fingerprint scanner is indeed present on HTC's next device, it could be a major USP and could find usage in authenticating users to unlock the phone or for mobile payment authorisations.

Rumours of the HTC One Max sporting a fingerprint scanner come at a time when other rumours pointing to Apple's next generation smartphone sporting a similar feature are rife. Rumours have pointed out that the next iPhone 5S could also include a fingerprint reader feature that could provide a seamless way to authenticate users while unlocking the phone.

Earlier, a report in the Chinese media claimed that the HTC One Max will likely run on Android 4.3 Jelly Bean with HTC's Sense 5.5 UI on top. Other leaked specifications include TD-LTE connectivity, 5.9-inch full-HD display with 1080x1920 pixels resolution, 2.3GHz quad-core Snapdragon processor with 2GB of RAM and Wi-Fi. The site also revealed that the alleged HTC One Max will sport a 2.1-megapixel front-facing camera and an UltraPixel camera on the back, which was first introduced on the HTC One.