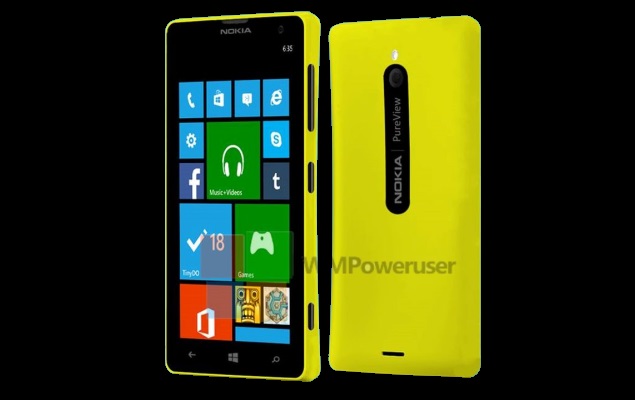 The Nokia Lumia 925, Lumia 1020 and Lumia 625 may have been unveiled globally but have not seen the light of day in India. While India still waits to lay its hands on the new Lumia trio, another Lumia smartphone has been spotted online.

WMPoweruser has published a press render image of the alleged Nokia Lumia 729 for Verizon. The image shows a yellow coloured Lumia 729 with a PureView branding at the back that suggests that the camera will sport PureView technology.

According to the site, the Nokia Lumia 729 will find itself below the Lumia 928 and the Lumia 822 in Verizon's Lumia portfolio. Unfortunately, no details about specifications of the alleged Lumia 729 have been leaked with the image but it is likely to have innards identical to the Lumia 720.

Recently, a picture of alleged  Nokia Lumia phablet front panel was leaked online. The image clearly showed a slim bezel with Nokia beneath the earpiece. The report also claimed that Nokia has already started mass-production of the device that would feature a 6-inch display. The image of the slim bezel also shows space left for a front camera and a sensor.

Not much is known about the device except the leaked front bezel image. But if the rumours are true then we might get to hear more about the phablet, soon.

Nokia's 'Treasure Tag' will help locate keys or other objects through Lumia phones
Google Glass finds another use: Filmmaking