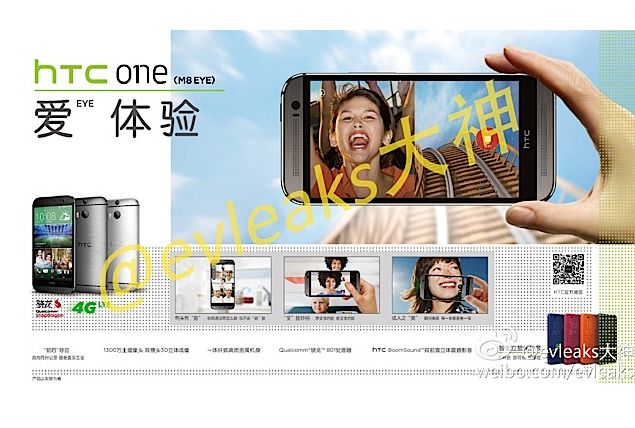 While the rumour mill is still speculating HTC will showcase a smartphone and a rugged GoPro-like camera on the scheduled 'Double Exposure' event on October 8, the anticipated smartphone on Tuesday is said to have been leaked in a press render image, along with the name HTC One (M8 Eye) - which differs slightly from the previous rumoured HTC One (M8) Eye name.

The purported press render image of HTC One (M8 Eye) from a Weibo user named @evleaks (via Gsmdome) suggests the anticipated new smartphone will sport a similar design to the HTC One (M8) (Review | Pictures). The smartphone is also said to include a duo camera setup similar to the One (M8)'s, however with a 13-megapixel camera sensor instead of a 4-UltraPixel alongside the depth sensor. Apart from this, the HTC One (M8 Eye) is said to include the same specifications as the original flagship.

Last week, a report claimed that HTC might introduce its upcoming HTC One (M8) Eye handset with a 13-megapixel rear camera paired with the duo camera technology. LlabTooFer, who tweeted the information, also mentioned the One (M8) Eye will run on Android 4.4.4 KitKat out-of-the-box paired with the latest Sense 6.0 UI. "M8_EYE is M8 with 13MP Duo camera.It's coming next month with Android 4.4.4 and Sense 6.0 on board. Die ultrapixels, die :) LOL'' the tweet stated.

A recent report also suggested that the Taiwanese giant is set to unveil a GoPro-like rugged waterproof camera dubbed RECamera. The report included some leaked images of the device along with other information. The Taiwanese giant in a tweet from an all new RECamera Twitter account further cemented the fact that a camera-like device will be revealed at HTC's 'Double Exposure' media event on October 8 in New York.
Comments