Pogie awards for the brightest ideas of 2012 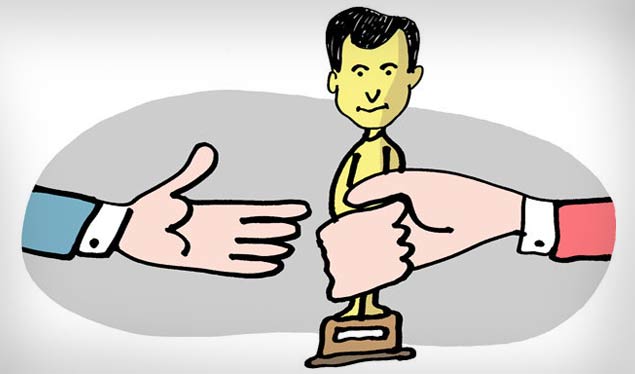 Good evening, and welcome to The Dalles, Ore.! Here in the cafetorium of the James A. Garfield Middle School, we meet every year for the biggest event in technology the Pogie awards!

We don't award these coveted trophies to the best products of the year; everybody does that. No, the Pogies celebrate the best ideas of the year ingenious features that somehow made it past the lawyers, through the penny-pinching committees and into real-world tech gadgets - even if the products overall are turkeys.

So now, for the eighth straight year the FedEx envelopes, please!

Smart say
On Samsung's Galaxy S III phone, the front-facing camera looks for your eyes. When you're not looking at the screen, it dims to save battery power. It brightens right back up when you return your gaze.

Power nap
Most of the world's laptops do exactly one thing when you close their lids: sleep. All other activity stops.

But Apple asked Why? Why can't network activity keep chugging away even when the lid is closed? Why can't your laptop keep backing itself up, downloading e-mail and syncing its online data (calendars, calendar notes, reminders, photos)?

That is the idea behind Power Nap, a feature of OS X Mountain Lion that works on recent MacBook models. You can wake up, grab your laptop and head out, confident that it is backed up and has the latest mail downloaded.

Slipstream
On Amazon's 8.9-inch Kindle HD, something ingenious happens when you call up a big-name Web site: It pops onto your screen fast, all at once. It's almost as though the Kindle's browser is loading a JPEG screenshot of a Web page, rather than the dozens of individual graphics, text bits and other elements that constitute a Web page. And that's exactly what it is doing. Behind the scenes, Amazon's servers grab frequent screenshots of the most popular Web sites; when you visit one, what you see first is that JPEG image (with live links in the right places, fortunately).

While you are studying that image, the browser continues to fetch the component pieces of the page - and after a few seconds, a blink (and occasionally a shifted element) lets you know that you are now looking at the real deal. It is a sneaky, logical, brilliant trick that saves you time and costs you nothing.

Cycloramic
Just when you think that nobody could possibly have another fresh idea for a phone app, Cycloramic ($1) makes 360-degree panoramic videos - without a tripod or swivel.

You stand the phone upright and tap the Go button. Incredibly, the phone, balancing on its end, begins to rotate itself. Freakiest darned thing you ever saw. Great for winning bar bets or establishing new religions.

If you've ever seen a phone scoot itself along a table when it is in buzz mode, you get the principle. The app triggers the phone's vibration module at exactly the right frequencies to make the phone turn on the table. The phone's sensors figure out how far it's rotated.

It works only on shiny surfaces like glass, polished granite or laminated wood (like desks), and only the iPhone 5 has exactly the right balance. It's a jaw-dropper.

Electronic leashes
The Ciago iAlert and Cobra Tag are Bluetooth keychain fobs that communicate with your iPhone or Android phone. Once you're 30 feet away from the phone, the keychain starts beeping, as though to say, "You're leaving your $200 phone behind, you idiot!" It works the other way, too; the phone beeps if you leave your keys behind.

In practice, these fobs are cheaply built and, if the Amazon reviews are to be believed, not always reliable. But remember - on the night of the Pogies, it's the idea that counts.

Bluetooth 4.0
Bluetooth is that wireless technology that connects gadgets within 30 feet your phone to your headset, for example and kills your battery charge. Right?

Actually, it doesn't anymore. Bluetooth 4.0, built into the latest iPhone and Android phones, is also called Bluetooth LE (low energy) for a reason. For the most part, it uses power only when it has data to exchange. The rest of the time, it sleeps.

A few Bluetooth 4 gadgets are already available, like the latest FitBit activity trackers, the Node universal sensor module, and some of those electronic leashes. As a bonus, the phone apps for these products do not require a separate trip to your Settings app to pair them; you can do that right in the app.

Driving mode
Motorola already has a shelf full of Pogie awards, thanks to its dedication to smart and unusual cellphone features.

Some of its recent models Atrix, Droid Razr and others offer something called Smart Actions, and they're bristling with Pogie nominees. How about the option called, "Show dialpad automatically when calling voice mail and toll-free numbers"? Definitely a contender. Or how about the feature that automatically turns your phone to Vibrate during the hours of any meeting on your calendar?

But this year, the award goes to Driving Mode. If you have a Moto headset or car dock, your phone auto-detects when you're driving. At that point, the phone sets the ringer to Loud, turns on GPS, announces incoming callers' names by voice, and auto-responds to incoming text messages with an "I'm driving - call you later" response. Pure genius.

Do not disturb
Here's another brilliant phone feature that began as a Motorola Smart Action and reached a much bigger audience in iOS 6, the latest iPhone software.

In Do Not Disturb mode, your phone doesn't ring, vibrate or light up. It's just like Airplane Mode, except that you can designate certain people whose calls and texts are allowed to ring through.

What a great setup for nighttime While you're asleep, the most important people can reach you if it's important, but idiot telemarketers get dumped to voice mail. To make matters sweeter, in iOS 6, you can set up a schedule for Do Not Disturb, so that it kicks in automatically at your usual bedtime and turns off when you wake.

A special checkbox, Repeated Calls, handles urgent situations. If anyone tries to call more than once within three minutes, they're obviously desperate to reach you. Do Not Disturb will permit those calls to ring.

Full induction stoves
You know about induction stoves, right? Their surfaces are shiny, solid surfaces that don't heat up. Only the pot or pan gets hot (you have to use special ferromagnetic cookware).

Ordinarily, these cooktops feature painted circles that show you where you can put the pots. This year, Siemens and its subsidiary Thermador have introduced featureless induction stoves; you can put the pots or pans (up to four of them) anywhere you like. The cooktop detects the size, shape and placement of the pots automatically.

Kid's corner
Windows Phone phones may not be flying off the shelves, but it's not because the software isn't any good. And Kid's Corner is particularly inspired.

The problem Your offspring in the back seat claims to be bored, begs you to hand over your phone. (Yes, yes, that's right - it's a first-world problem. But still.)

In the Windows Phone 8 software, with a quick left swipe from the Lock screen, you open Kid's Corner, a sanitized version of the operating system that contains only apps, music and videos that you've handpicked in advance. Web browsing, e-mail and phone calls are off limits. So are in-app purchases.

Now, you may have noticed that a lot of this year's Pogie winners are smartphone features. That's not because the judges particularly favor phones, but because these days, cellphones receive the largest share of the industry's imagination, talent and money.

Imagination, talent and money here's wishing you lots of them in 2013. Happy high-tech New Year!