Poco M3 Price Leaks Ahead of Launch Today, Expected to Start at EUR 149

Poco M3 will be launched globally at 5:30pm IST today. 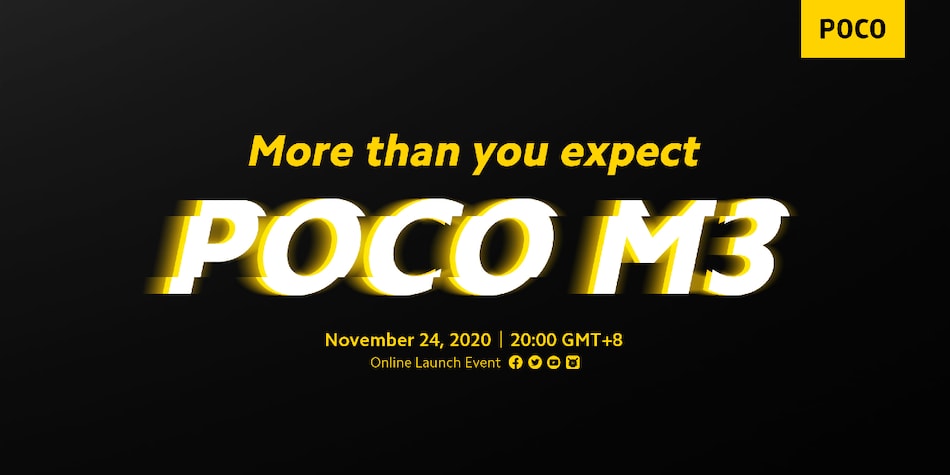 The speculated price of Poco M3 was tipped in a report by 91mobiles via known tipster Ishan Agarwal. The Xiaomi sub-brand will be launching the smartphone in Europe today. While there is no word about when Poco M3 will be launched in India, it is expected to make its way to Asian markets soon as it has received the SIRIM certification in Malaysia. Poco M3 launch event will begin at 5:30pm IST on November 24. The online event will be livestreamed by the company on YouTube, Facebook, and Twitter.

Poco confirmed that the upcoming M-series smartphone will feature a 6.53-inch display. Under the hood, it will have the Qualcomm Snapdragon 662 octa-core SoC. Poco M3 will pack a large 6,000mAh battery.

As per past leaks, the Poco smartphone may sport a triple rear camera setup, highlighted by a 48-megapixel primary snapper. It is expected to have dual speakers and come with 18W fast charging support.

A video teaser posted by Poco's global Twitter account revealed that Poco M3 has a unique dual-palette design with a black rectangular module in the top portion for the camera setup and the company logo. The camera module has three sensors and the logo sits parallel to the camera module on the other side. The rest of the back panel is seen with blue or black finishes. There is expected to be a yellow colour variant as well.