Xiaomi is yet to rollout an OTA update based on Android 9.0 Pie for the Poco F1

Poco F1 has now started receiving MIUI 10.1 Global Stable ROM based on Android 9.0 Pie. The new ROM comes weeks after Xiaomi started testing Android Pie for the handset through MIUI 10 Global ROM versions. It brings Google Lens integration and resolves a list of bugs. The Poco F1 was launched back in August with Android 8.1 Oreo on top of MIUI 9.6. Unlike the traditional MIUI ROM that comes preloaded on Xiaomi phones, the Poco F1 debuted with a customised version that the company called MIUI for Poco.

As reported by multiple users on the official MIUI forums, the MIUI 10.1 Global Stable ROM has been released for the Poco F1 that brings Android 9.0 Pie. The update has build V10.1.3.0.PEJMIFI and is 1.7GB in size. As per the screenshots posted by the users, the latest MIUI update comes with the November 2018 Android security patch. The changelog also specifies that the update brings the Google Lens integration as well as includes fixes for a list of known bugs. However, the update apparently doesn't include 960fps slow-motion video recording that was a part of the MIUI 10 beta build. 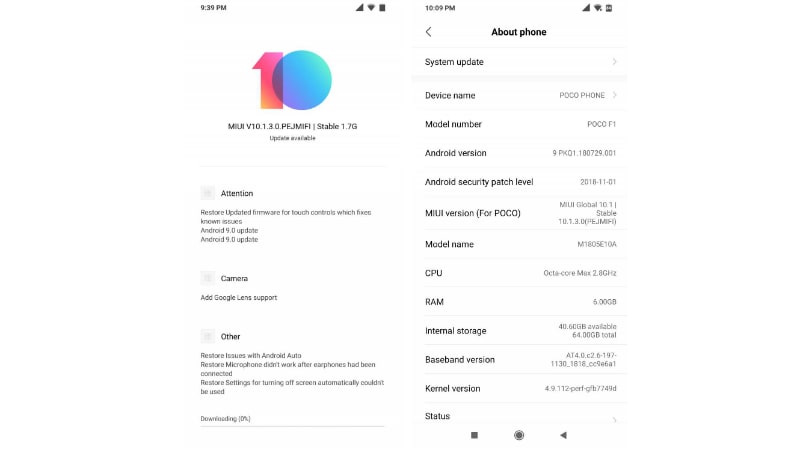 We've reached out to Xiaomi for clarity on the rollout of MIUI 10.1 Global Stable update for the Poco F1 and will update this space accordingly.

Last month, Xiaomi released MIUI 10 Global Beta ROM 8.11.15 based on Android 9.0 Pie for the Poco F1. The company also confirmed the release of a stable Android Pie update at the time of launching the handset back in August.

Notably, the Poco F1 was launched with a starting price of Rs. 20,999, but it recently received a price cut of Rs. 1,000. The price cut is applicable to all variants of the Poco F1, including the Armour Edition.

The dual-SIM Xiaomi Poco F1 features a 6.18-inch full-HD+ (1080x2246 pixels) display along with a 2.5D curved Gorilla Glass 3 protection. Under the hood, there is a Qualcomm Snapdragon 845 SoC, paired with 6GB and 8GB RAM options. The smartphone has a dual rear camera setup along with a 12-megapixel Sony IMX363 primary sensor along with a 1.4-micron pixel size and dual-pixel autofocus and a 5-megapixel secondary sensor. At the front, there is a 20-megapixel camera along with HDR and AI Beautify features. The smartphone also has an IR light that works with a pre-installed Face Unlock feature.

The Poco F1 comes in 64GB, 128GB, and 256GB of onboard storage options that all are expandable via microSD card (up to 256GB) in a hybrid SIM slot configuration. On the connectivity front, the smartphone has 4G+, VoLTE, Wi-Fi 802.11ac, Bluetooth v5.0, USB Type-C, 3.5mm headphone jack. Sensors on board the handset are an accelerometer, ambient light sensor, digital compass, gyroscope, and proximity sensor. Besides, there is a 4,000mAh battery that supports 18W charging and Quick Charge 3.