The latest MIUI update for Poco F1 is rolling out in batches.

Poco F1 has started receiving MIUI v10.3.5.0 that brings the May 2019 Android security patch. The latest MIUI update also includes features such as a customisable lock screen clock and a fix pertaining to the dual app functionality. The rollout of the MIUI v10.3.5.0 update for the Poco F1 has been confirmed by General Manager C Manmohan. Separately, the Poco F1 has received a formal confirmation for getting an update to Android Q. The handset was launched with Android Oreo-based MIUI last year, though it got the Android Pie with MIUI 10 earlier this year.

Manmohan on Tuesday tweeted a screenshot confirming the rollout of the MIUI v10.3.5.0 update for the Poco F1. The update carries firmware version MIUI v10.3.5.0.PEJMIXM and is 387MB of size.

As per the official changelog visible on the screenshot posted by the Xiaomi executive, the latest MIUI update brings the May 2019 Android security patch to the Poco F1. The update also adds a customisable lock screen clock that can be added by going to Settings > Lock screen & password > Advanced settings. Importantly, the new lock screen clock doesn't work with third-party themes.

The new MIUI update also adds sorting principles for Wi-Fi networks and fixes the issue that was disappearing dual apps after a reboot. Furthermore, the update is likely to include various system-level performance improvements and bug fixes. 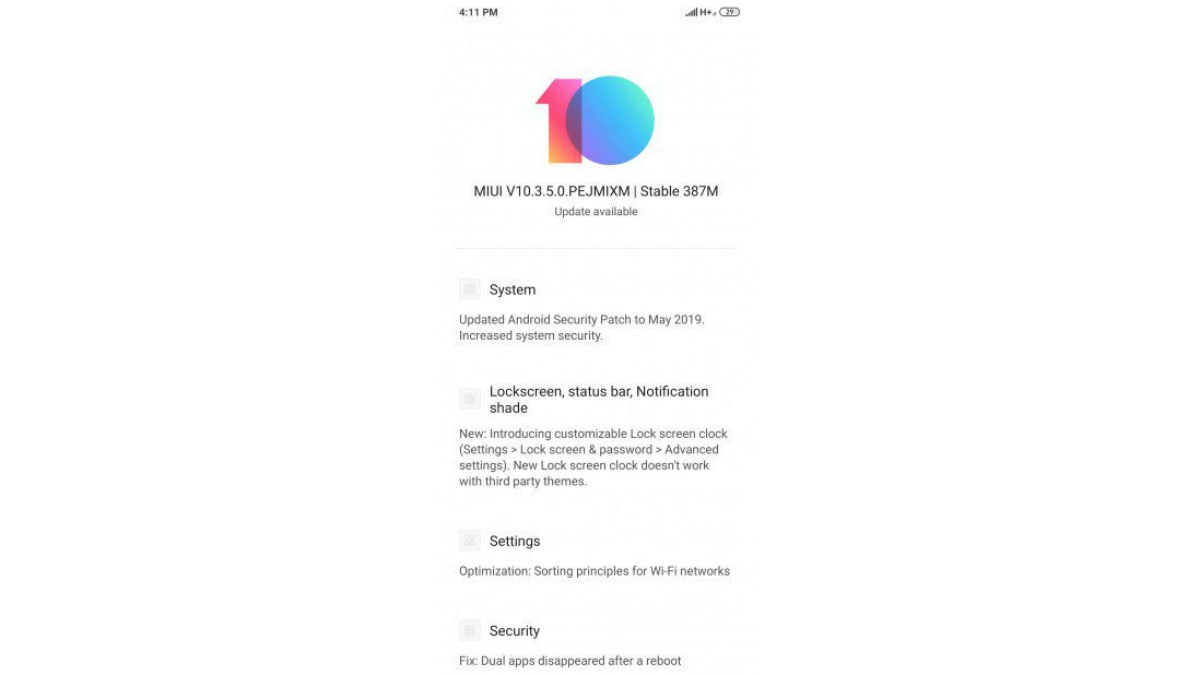 Like any previous MIUI updates, the MIUI v10.3.5.0 for the Poco F1 is initially rolling out in phases and is set to reach all the users gradually in a week.

You would be able to manually check for the latest MIUI update upon its arrival on your Poco F1 by going to Settings > About phone > System update.

In addition to the fresh MIUI rollout, Xiaomi is set to bring Android Q to the Poco F1. Poco Global Head Alvin Tse through a tweet confirmed the Android Q update for the Poco F1. Tse while responding to a user query also separately mentioned that MIUI 11 for the Poco F1 "isn't too far away." However, it is worth pointing out that Xiaomi hasn't provided any concrete timeline on either the new Android version or for the next-generation MIUI update.

In April, Xiaomi brought the MIUI v10.3.4.0 update for the Poco F1 that included features such as Widevine L1 support, 60fps 4K video recording, and a dedicated Game Turbo mode.