PaperFold Smartphone Can Be Unfolded Into a Laptop, Map or Tablet 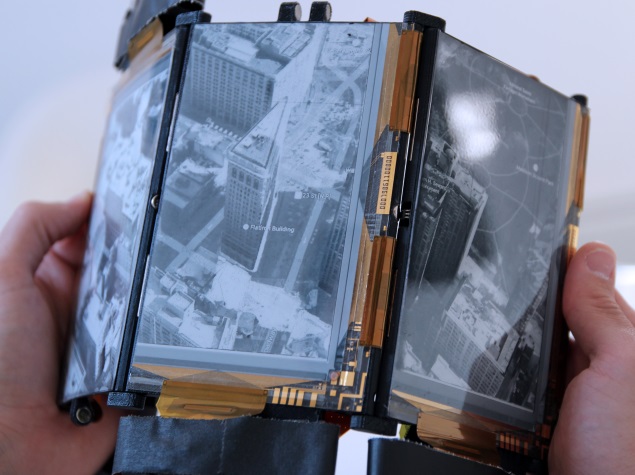 Scientists have developed they call the world's first foldable smartphone that changes to a tablet and a notebook using a set of screens and hinges.

Displays are detachable such that users can fold the device into various shapes that can range from an ultraportable notebook shape to a foldout map.

"In PaperFold, each display tile can act independently or as part of a single system," said Dr. Vertegaal, a professor in the School of Computing and Director of the Human Media Lab at Queen's University, Canada.

PaperFold automatically recognises its shape and changes its graphics to provide different functionality upon shape changes.

For example, folding the device into an ultraportable notebook form factor opens up a keyboard on the bottom screen. Users could use this form factor to type a search.

By flattening PaperFold's three displays, the user changes views to a Google Map that spans all screens.

Shaping PaperFold into a convex shape shows the map in Google Earth view.

Folding PaperFold into the shape of a 3D building on the map will pick up a Google SketchUp model of the building and turn the device into an architectural model that can be 3D printed.

Researchers said the inspiration for PaperFold came from its namesake: paper.

Typically, mobile devices require scrolling or zooming in order to see different parts of a document whereas paper can be folded, detached or combined allowing it to be accessed in multiple parallel forms.

"The development of electronic paper computers that can adopt similar qualities to paper has been an enduring research goal for our team," said Vertegaal.

"Books use folding as both a navigational and space saving technique, and paper maps have malleable display sizes.

"The PaperFold smartphone adopts folding techniques that makes paper so versatile, and employs them to change views or functionality of a smartphone, as well as alter its screen real estate in a flexible manner. PaperFold demonstrates how form could equal function in malleable mobile devices," Vertegaal said.

The PaperFold was unveiled at the ACM CHI 2014 conference in Toronto.